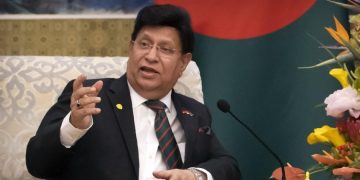 New Delhi, December 12 (ENS): Rejecting allegations that religious minorities are persecuted in his country, Bangladesh Foreign Minister AK Abdul Momen has cancelled his scheduled visit to India. Momen was scheduled to visit India from December 12 to 14.

“There are very few countries where communal harmony is as good as in Bangladesh,” Momen said.  According to an earlier advisory issued by the Ministry of External Affairs, Momen was scheduled to arrive here at 5:20 pm on Thursday.

The minister said that India has many problems within its country. “Let them fight among themselves. That does not bother us. As a friendly country, we hope that India will not do something that affects our friendly relationship,” he said.

Home Minister Amit Shah had referred to Bangladesh as an example during the debate on the Citizenship (Amendment) Bill on Wednesday.

There have been massive protests in Assam and several northeastern states against the proposed legislation which seeks to provide citizenship to persecuted religious minorities from Bangladesh, Pakistan and Afghanistan.

A foreign minister official here said the trip was cancelled at the very last minute as Momen was to fly to Delhi today (Thursday).

He said the foreign minister has cancelled his trip due to “complications arising out of the CAB-NRC process”.

Bangladesh is perhaps trying to send a strong signal because it feels India has brushed aside its apprehensions over the NRC-CAB process.

“Home Minister Amit Shah is defaming our country by equating us with Pakistan and blaming us for the persecution of minorities. Hindus are much safer here than Muslims are in Bangladesh,” said a senior Awami League leader, but on condition of anonymity.

He said his party was desperate to hold back Hindus who are loyal voters of Awami League and make a difference in at least 50 of the 300 parliament seats.

The two Track 1.5 dialogues to be held at the Pravasi Bharatiya Kendra here consecutively on two days from December 13 aimed at building an inclusive approach for a “cooperative, free, and rules-based Indo-Pacific” region.

Hosted by the Ministry of External Affairs the dialogues–which are key elements of the Indian Ocean Rim Association (IORA), and the India-ASEAN calendars respectively-will be held consecutively and on similar, Indo-Pacific themes.

The 6th Indian Ocean Dialogue on December 13 on the theme “Indo-Pacific: Re-imagining the Indian Ocean through an Expanded Geography”.

It is being organised with the assistance of the Indian Council for World Affairs.

The theme for this year’s Delhi Dialogue is “Advancing Partnership in Indo-Pacific”, and is being organised with the assistance of the Research and Information System (RIS) for Developing Countries.