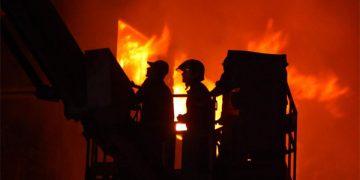 Aug 27 – Three people were killed and 50 others sustained injuries after a fire broke out in Murshidabad Medical College Hospital in West Bengal’s Beharampur city on Saturday, triggering panic among patients and their relatives.

“Two women, both nursing aides, died in the stampede following the incident of fire which broke out at 11.50 am at the hospital. Some others are injured, but we are yet to receive details,” Director of Health Services Biswaranjan Satpathy said in Kolkata.

Giving details, Satpathy said that a fire broke out in the AC machine of a vacant VIP cabin at the main medical ward of the hospital. “Everybody tried to run away to escape from the fire which resulted in a stampede in which two ayahs (nursing aides) died,” he said.

“Patients in the adjacent wards were immediately taken out including those from the paediatric ward and all of them were relocated to the newly built MCH (mother child) Hub,” Satpathy said.

Chief Minister Mamata Banerjee is monitoring the situation from Kolkata, while a four-member high power team from Kolkata has been asked to rush to the site at the earliest, he said.

A departmental inquiry has already been ordered to probe the incident, Satpathy said, adding the Chief Medical Officer of Health (CMOH) of the hospital Subhasis Saha was monitoring the situation, while a special medical team from Malda has already rushed to the spot for assistance. “There is no panic right now and the situation is under control,” Satpathy said.

State Fire Minister Sovan Chatterjee said the blaze was now well under control. The firemen at the spot suspect that a short circuit in the AC machine of the VIP cabin triggered the fire.