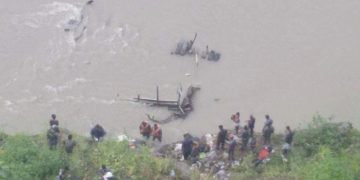 21 killed in bus accident in Nepal

21 killed in bus accident in Nepal The security personnel deployed from Chitwan District Police Office in search and rescue operation for a passenger bus that plunged into Trishuli River near Kalikhola along the Narayangadh Munglin road section on Friday, August 26, 2016. Photo: Tilak Ram Rimal/THT

Aug 26 (NIA) – At least 21 people were killed and 16 others injured when a passenger bus drove off a highway in Nepal and plunged into a river on Friday, police said.

Police said the bus rolled about 100 meters down the slope in the early hours of Friday and crashed into the Trishuli river near Chandibhanjyang, about 120 kilometers west of the capital, Kathmandu.

Police and locals rescued the injured and pulled out the bodies from the wreckage of the bus, which was submerged in the river.

The injured were sent to the hospitals in Bharatpur.

A special team has been deployed to conduct search and rescue operations and police are investigating the cause of the pre-dawn accident.

Police said 39 people including the bus driver and a conductor was on board the bus.

Earlier this month, an overcrowded bus veered off a mountain trail in eastern Nepal, killing at least 33 people and injuring 28 others.