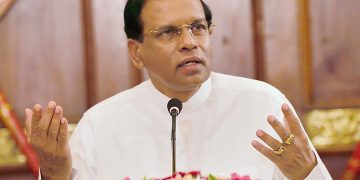 Sources from President Maithripala Sirisena’s office told NIA that police on Monday arrested the 17 year old boy but are yet to arrest the Bangladeshi.
Initial investigations revealed that the 17 year old school boy was from the Central Hills of Kandy.
“Police are not sure what their actual motive is but investigations are continuing,” sources said.
President’s Sirisena’s official website and a few other government websites were hacked for two consecutive days on Aug 25 and 26  by a group calling itself the “Sri Lankan Youth”.
The hackers had posted a statement in the local language Sinhala on the web page and the site was inaccessible for a few hours.
The group expressed disappointment over Prime Minister Ranil Wickremesinghe’s work and warned that the government would have to face a cyber war if the President could not take care of the security of Sri Lankan government websites.
The hackers further urged the President to look into the issues faced by university students and hold a President Election if the President could not control the situation.
SendShare1Tweet1ShareShare