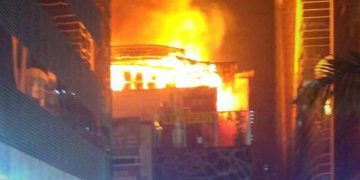 by Editor
in Around South Asia, Around The World, India, Top Story
Reading Time: 3 mins read
1 0 Mumbai, December 29 (Hindustan Times): Fourteen people were killed and at least 16 injured when a fire broke out in a rooftop restaurant and engulfed a four-storey building in Mumbai’s thriving Kamala Mills complex late on Thursday night, raising concerns over fire-safety norms in the city’s commercial hubs.

Eleven of the victims were women, many of whom had come to a pub, 1Above, to celebrate the birthday of 29-year-old Khushboo Mehta Bansali, who was among the dead. Two of those who died were US-based men who went back in to try and rescue their aunt from the blaze.

All 14 victims killed in the fire died due to suffocation from not being able to find an exit, officials said.

The exact cause of the fire, which started at 12.27am and was doused by eight fire tenders and five tankers about six hours later, is not yet known. But officials said the flames spread quickly because of bamboo and other flammable material on the rooftops of 1Above and the adjacent Mojo Bistro.

Both restaurants had been served three notices each for safety violations in recent months.

In a video that was posted on social media, Bansali, dressed in a black top, is seen blowing out candles on her birthday cake to the chorus of “Happy Birthday”. The video is believed to have been recorded minutes before the fire broke out.

On Friday, Chief Minister Devendra Fadnavis directed Mumbai’s Municipal Commissioner Ajoy Mehta to conduct an inquiry and determine who was responsible for the incident.

In an official statement, the management of 1 Above said it was not to blame: “All our premises are well inspected and we have all requisite permissions.”

According to the Mumbai Fire Brigade (MFB) officials, however, both restaurants did not have emergency exits, which led to over 200 people getting trapped inside. The pubs did not have working fire safety equipment, and flammable material such as tarpaulin sheets and artificial flowers for decoration aggravated the fire, said deputy chief fire officer R Chaudhary.

Mojo Bistro and 1Above had made extensive alterations to the structure of the building, and illegally occupied the large balcony area of the top floor, the officials said. “Both had licences only to use one-third of the area of the floor. The remaining two-thirds was supposed to be an open balcony.”

In August, the BMC had demolished part of the balcony extension common to Mojo Bistro and 1Above. In September, the BMC found the space was being used again, and in October, it raided and confiscated the furniture placed in the balcony. 1Above was taken to court on three occasions between May and September.

But the BMC failed to answer questions about why it did not cancel their licences, and why the restaurants were allowed to continue serving customers.

“Five officers from the civic body have already been suspended. If they are found guilty of giving permission illegally, they too will be booked for criminal offence. The owner-directors of the rooftop restaurant are being booked under various sections of the IPC and are facing the charge of culpable homicide,” Fadnavis said after visiting the site.

Survivors from the fire said the staff, rather than pointing them to an exit, advised them to stay in the bathrooms.

“We had rushed into the bathroom, and the staff wouldn’t let us come out. That’s how many people suffocated,” said Prratik Thakur, 28, who was at 1Above. Some of the victims were found outside a restroom that had no windows.

Mahesh Narvekar, the head of the BMC’s disaster management cell, added: “The first rule during a fire is not to haul up in enclosed spaces, especially small rooms that get clouded with smoke. Restaurant staff did the exact opposite of what they should have done.”