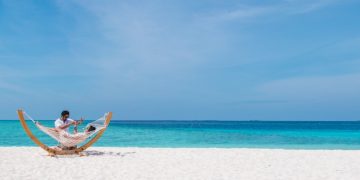 Male, July 23 (Maldvies Independent): Indian holidaymakers have become the second largest market for the Maldives tourism industry, overtaking traditional European markets with 100 percent growth during the first half of 2019.

But China is still in the number one contributor to the numbers despite a decline in its political fortunes in the island nation.

Some 82,140 Indian tourists visited the Maldives by the end of June, representing a 10 percent market share, according to statistics released on Monday by the tourism ministry.

Briefing the press on Monday, Tourism Minister Ali Waheed predicted arrivals from India to increase twofold by the end of the year, attributing the exponential growth to political stability and the revitalisation of traditionally close ties with the giant neighbour since the new administration took office in November.

The popularity of the Maldives as a holiday destination has been increasing in India with the resort trips of Bollywood celebrities drawing media attention, most recently the visit of superstar Shah Rukh Khan with his family last week.

The Maldives Marketing and Public Relations Corporation recently conducted roadshows in Bangalore, Mumbai, Kolkata, New Delhi and Chandigarh with the theme ‘Journey to the Sunny Side.’

“India is an extremely important market to us, showing potential for further growth as increased direct connections have made it easily accessible to travel to Maldives,” MMPRC chief Thoyyib Mohamed told Indian media.

“We are working closely with the industry partners to promote Maldives as the ideal holiday destination among luxury travellers, while also promoting other segments such as local island tourism and liveaboards.”

China retained first place as the top market. Bucking a downward trend since 2015, the number of Chinese holidaymakers grew 10 percent and reached 140,265 by the end of June, continuing growth recorded during a strong first quarter.

With the exception of seven percent growth in January, tourist arrivals have grown by double digits every month this year, reaching 862,589 visitors by the end of June, a 19 percent increase from last year.

Some 113,457 tourist arrivals were recorded during June, a 21 percent increase from the corresponding period in 2018.

The occupancy rate has also increased to 66 percent, a 2.4 percent rise compared to 2018. But the average duration of stay declined marginally by 0.3 percent to 6.3 days.

Tourist arrivals reached nearly half a million at the end of the first quarter. A whopping 36.2 percent increase in April was the highest growth rate since the 2004 Indian Ocean tsunami.

In June, there were 146 resorts in operation along with 554 guesthouses on local islands as well as 153 safari vessels and 12 city hotels.

There were a record 1.4 million tourist arrivals in 2018. The new government is aiming for 1.5 million visitors this year, a target that was missed in previous years.

The expansion of the country’s main international airport along with the opening of several new resorts is also expected to boost visitor numbers. Some 20 new resorts are due to open this year.