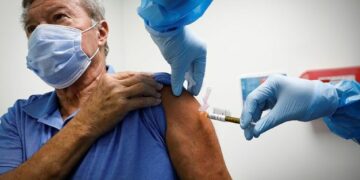 New York, September 9: Starting September 20, millions of Americans who received their second shot of either of the mRNA coronavirus vaccines at least eight months ago are supposed to become eligible for a third dose.

But America’s nascent booster campaign has a problem: When the Biden administration announced it last month, the idea of offering third doses hadn’t been approved by the Food and Drug Administration — and it still hasn’t. The timing of the decision drew criticism from some scientists and accusations of vaccine hoarding from the World Health Organization, whose director said booster programs “make a mockery of vaccine equity.”

Could booster shots help end the U.S. outbreak, and at what cost to those in other countries? Here’s what people are saying.

The scientific debate around boosters hinges on two questions: Is vaccine protection declining? And if so, would a third dose help?

On the first question, there is no firm consensus, as my colleague David Leonhardt wrote last week. Some studies have suggested that people vaccinated many months ago have become more susceptible to infection. But it’s not clear whether the apparent effect owes to waning immunity or other confounding variables — the rise of the much more infectious Delta variant in June, for example, or the decline in mask wearing and increase in social activity that attended it.

“If there’s data proving the need for boosters, where is it?” The Times columnist Zeynep Tufekci wrote last month. To assess the need and effectiveness of boosters, she argued, a randomized trial should have begun in May or June, when the protective effect of early vaccinations might have begun to wane. “By now, we’d have real data rather than a news release.”

Eventually, protection against infection is expected to wane. But that in itself would not necessarily justify additional doses. As Katherine J. Wu explains in The Atlantic, the immune system’s first line of defense against most pathogens naturally erodes over time; long-term immunity — the key measure of which is protection against severe disease and death, not infection — flows from the body’s ability to remember how to redeploy its many defenses.

And right now, she writes, we have no reason to believe that the immune system is forgetting how to do this: Vaccinated people are fighting off the worst cases just as well as they did six months ago.

But could a third dose still strengthen the vaccines’ protection? For people with fragile immune systems, the answer appears to be yes: About 3 percent to 5 percent of the population is immunocompromised, some of whom did not produce a strong immune response from their initial doses. A third shot could offer them the immunity most people get from two shots, The Times’s Apoorva Mandavilli says.

But for immunocompetent people, it’s hard to say how much a third dose would help. It could increase antibody production, Wu writes, which could in turn cut down on transmission — but for how long? Some experts say waiting for a vaccine that’s tailored to the Delta variant or administered nasally would be a surer bet.

“We don’t know whether a non-Delta booster would improve protection against Delta,” Dr. Aaron Richterman of the University of Pennsylvania told Leonhardt.

A separate question is whether a third dose would extend immune memory. Though there is no evidence at the moment, Dr. Peter Hotez, a vaccine expert at the Baylor College of Medicine, believes it might: Most pediatric vaccines have at least an eight-week recommended interval between doses — as opposed to the Covid vaccines’ three- and four-week intervals — followed by boosters at even longer intervals.

“Greater spacing helps to maximize immunological memory and antibody responses,” he writes in The Los Angeles Times. “It’s possible that from the start, the mRNA Covid-19 vaccine was most effective as a three-dose vaccine, even without pressure from the Delta variant.”

The bottom line: When Biden announced the booster program, he said: “It will make you safer, and for longer. And it will help us end the pandemic faster.” But for immunocompetent people, federal health officials have said they do not have evidence to support those claims.

Brett Giroir, who led the Covid-19 testing program in the Trump administration, offered The Atlantic a thought experiment: “What would have been the reaction if Trump had done something similar, say by laying out a vaccine program months before the F.D.A. had even approved a vaccine? Answering his own rhetorical question, Giroir said there would have been ‘outrage over political pressure on F.D.A.’”

The Biden administration prides itself on following the science, but some doubt science is the only force at play. Dr. Céline Gounder, an infectious-disease specialist who served on the Biden transition Covid advisory board, believes the administration is “caving to anxious Americans who want as many doses of the vaccine as possible because they’re fearful of what breakthrough infections could mean.” And the pharmaceutical companies that produce the vaccines, for their part, have a strong interest in selling as many doses as possible.

Can we really ‘do both’?

If the world had an infinite supply of vaccines, the stakes to the booster debate would be much lower. But as vaccine-rich countries ponder the marginal utility of third doses, billions of people are still waiting to receive their first: Of the 5.6 billion shots given around the world, 80 percent have been administered in high- and upper-middle-income countries, while less than 0.4 percent have been administered in low-income countries.

“We’re planning to hand out extra life jackets to people who already have life jackets while we’re leaving other people to drown without a single life jacket,” Mike Ryan, the executive director of the World Health Organization’s Health Emergencies Program, said last month. “That’s the reality.”

When should a country stop prioritizing the concerns of its own citizens over the needs of people in other countries? A group of ethicists writing in The Journal of American Medical Association last month suggested using the flu as a benchmark: When the American Covid outbreak becomes no more perilous than a bad flu season, then there is no longer an ethical justification for retaining vaccine doses. The United States hasn’t reached that benchmark, but, as they write, third doses are not a meaningful way to achieve that goal, since the virus is preying largely on Americans who have avoided or refused even one.

The Biden administration denies any trade-off between a domestic booster program and the global vaccination effort and says, “We can do both.” Hotez agrees: “The fact is, fully immunizing the American people with three doses of mRNA vaccine should not be equated to denying vaccine doses to the rest of the world. Rather than fighting over a limited supply of vaccine, we simply must produce more.”

But a sufficient increase in supply is nowhere in the offing: This week, Covax, the United Nations-backed program to vaccinate the world, reduced its forecast for doses available in 2021 by roughly a quarter, citing manufacturing and trade delays.

The Biden administration promised last week to ramp up production of the raw materials for the vaccines in a bid to ease supply chain issues. But Tedros Adhanom Ghebreyesus, the W.H.O. director general, said Wednesday: “We don’t want any more promises. We just want the vaccines.”

Some argue that a universal booster campaign could even cut against the national interest. “To focus on boosters when more than half the world lacks vaccine doses is shortsighted and will only keep the pandemic burning longer,” the editors of the journal Nature wrote last month. “For wealthy countries, this strategy means they will be indefinitely chasing their tails in terms of new variants.”

Vaccine inequality comes at an economic cost, too: For just $50 billion to $70 billion, an effort by primarily rich countries to vaccinate people in poor countries would yield $9 trillion in additional economic growth by 2025, according to a May paper from the International Monetary Fund.

Vaccinate the World! The Best Investment Ever.

Yet altruism may prove the strongest foundation for any argument against universal booster campaigns. Experts say there is still no variant capable of outcompeting Delta, and while it’s possible one will emerge, it’s also possible one won’t.

And as much as vaccine inequality would cost the global economy, an August paper from The Economist Intelligence Unit estimated that the bulk of that cost would be borne by lower-income countries, especially those in the Asia-Pacific region.