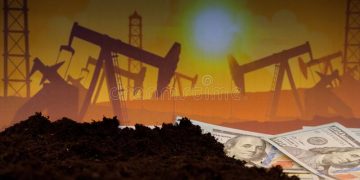 Is the petrodollar era ending to be replaced by an Yuan denominated oil market?

Is the petrodollar era ending to be replaced by an Yuan denominated oil market? Paris, May 6 (newsin.asia): On April 20, 2020, the price of a barrel of oil plummeted to – 37.63 US dollars at (West Texas Intermediate) WTI, as a result of the sharp drop in demand. US oil prices traded below zero! This had never happened before!! Certainly on the futures markets – relating to derivatives – subject to their own rules. But the announcement was so implausible that it diverted international public opinion for a day from COVID-19’s regular health reports.

Before answering such questions, let’s take a closer look at the sequence of events.

After the OPEC + meeting on March 05, the barrel of oil fell and reached 50 dollars for the first time since 2017. One day later, the barrel of crude loses 10% following the unchanged Russian production. On March 9, Saudi Arabia, the world’s largest producer, announces a price war against Moscow to try to increase its market share. The price of a barrel then reached a record price of 30 dollars.

At the end of March, the effect of the contagion was brutal.

The price of WTI crude oil reached 20 dollars, unheard of since the Gulf War. On April 2, an agreement between Moscow and Riyadh was made on the production cut. This stimulated the price of oil, which rebounded 25%. On April 9, the price of WTI fell by 9% despite the reduction in world production of 10 million barrels per day. The inevitable happened. On April 20, the price of a barrel went negative, seemingly defying all economic logic …

Multifaceted Cause of Price Plummeting

We are witnessing an unprecedented collapse of the oil market. Figure 1 shows, crude oil futures are falling below zero. The producers essentially pay to get rid of their oil. This is caused in particular by the global economic downturn and the collapse in global demand for oil by 30%. The crisis is exacerbated by the price war between Saudi Arabia and Russia, and also by haphazard announcements from US President Donald Trump, equating COVID-19 to seasonal flu and betting on a rapid recovery in the global economy.

The vicious circle of the oil market is broken. The reduced production of the Russians and the Saudis did not empower the producers of shale gas to make an increasingly handsome share. The forecast reduction in production promised at the beginning of April by the players is not up to compensate for the collapse in world demand. In a normal day, the world economy would have run out of oil. However, the unprecedented fall in crude oil (West Texas Intermediate) to zero US dollars, does not mean the end of the black gold but presents a significant risk, according to OCBC Bank Research. Some researchers argue that the negative price does not reflect the entire state of the world market. Futures contracts for June will rebound slightly despite the storage problem and weak demand. Besides, the situation was caused by uninitiated oil market speculators, who were forced to liquidate their positions at all costs.

The risk of contagion to other markets will, therefore, be limited. Negative prices only occurred for the May contracts with very small trading volumes. As of this writing, the oil price curve has reversed slightly as the WTI contract, which traded at the opening of the market at 0.56 dollars rebounded by 103% to return to 1.38 dollars around 7 a.m. (French time).

However, this episode will have important repercussions both psychologically and on the functioning of the market in the short and medium terms

The short-term effects are limited… but many re-structuring is expected.

In the short term, the problem of costly storage is unlikely to be resolved unless demand improves or the United States reduces production. The timetable for the reopening of the American economy remains an enigma, even if a conservative bet would be from July. At the same time, the United States is unwilling to cut production through centralized planning that goes against the ideals of capitalism. Europe appears to be down in the short term and may not rebound until 2021. Oil production is expected to experience a severe shock in the United States. The high production costs of shale gas producers should lead to a sharp decline in this sector and cascading closures. Almost definitive closure taking into account the cost of restoring deposits. This dynamic will also be identical in Canada.

The oil market remains the barometer of the world economy. Negative prices on the oil futures markets also indicate substantial uncertainty about the ability of the global economy to rebound in the medium term. The recent INSERM study shows that only 5.3% of the French population has been in contact with the virus after a blockade of the country for almost six weeks. France, like other countries, is very far from herd immunity and a return to normalcy. Countries like Singapore and Japan, after a relative mastery of the first wave of the epidemic, are facing a second, larger wave. Against this backdrop of great uncertainty about the way out of the crisis, the futures markets do not seem to have revealed all their secrets. Failure of containment policies around the world could lead to greater depression and a cascading bankruptcy in the global oil sector (notably those of Shale Gas in the United States).

This episode of COVID-19 will also mark a profound change in consumer behavior. The consumption of petroleum products is expected to decline structurally. At the same time, the tourism and airline markets are expected to remain depressed for many years. Some specialists do not see air transport returning to the  2019 level for a decade. In the absence of a miraculous cure or a vaccine, the COVID-19 pandemic risks profoundly altered consumption patterns and changed global and sustained demand for petroleum products. Could this mark a smashing entry into the post-oil era or more precisely the end of the petrodollar era? Because the only country willing to buy oil, if activity picks up, is China. But China would like to move to other types of contracts denominated in Yuan.

Adel BEN YOUSSEF is currently Lecturer at the University of Côte d’Azur and member of the CNRS research laboratory (GREDEG – CNR UMR 7321). He specializes in environmental economics and climate change.

Fateh BELAÏD is Professor of Economics at the Faculty of Management of Economics & Sciences (Catholic University of Lille). This research is particularly concerned with the economics of energy and the environment.

Benjamin Chiao is Professor at Paris School of Business and Southwestern University of Finance and Economics. His areas of research are the Chinese economy, energy economics, industrial economics and decision biology.

Khaled GUESMI is a professor of finance at the Paris School of Business and Director of the Center for Research on Energy and Climate Change (CRECC). Her research focuses on subjects such as the financialization of raw materials and the effect of contagion between stock markets and energy markets.