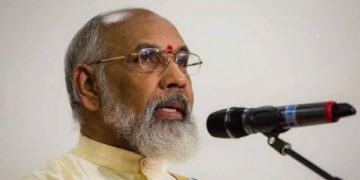 Colombo, September 7: Controversial and provocative statements made by the Tamil Makkal Thesiya Koottani (TMTK) MP and former Northern Province Chief Minister C.V.Wigneswaran are likely to result in a hardening of the majority Sinhala community’s stand on the contentious 13 th.Amendment of the Sri Lankan constitution.

The 13 A, enacted in 1987 at India’s insistence, gives Sri Lanka’s provinces a modicum of autonomy through devolution of power. However, the dominant view among the Sinhalas has always been that the 13A was an imposition by India and that it should be cast away at the earliest. But the Tamils, who bitterly opposed the 13A from 1987 to 2009 (in that period they were hooked on the dream of securing a fully independent Tamil Eelam) are now wanting it desperately.

The Tamils are now seized by the fear that the current Gotabaya Rajapaksa government is capable of jettisoning the 13A lock, stock and barrel, depriving the Tamils of what little autonomy they have under 13A.

To the Sinhala majority, the 13A smacks of federalism, which is anathema because it is equated with secession and separation.  In this context, Wigneswaran’s statements during and after the parliamentary elections are accentuating the entrenched anxieties among the Sinhalas. He has gone beyond the routine demand for federalism and greater devolution of power, to demand the “right to self-determination” which he says should be exercised through an internationally supervised referendum among the Lankan Tamils.

Addressing a meeting in Kilinochchi last weekend, Wigneswaran went to the extremity and appealed to former cadres of the Liberation Tigers of Tamil Eelam (LTTE) to join the TMTK. He praised their commitment to the cause of Tamil liberation (namely an independent Tamil Eelam) and said that such commitment to a goal is necessary now if the Tamils are to secure their rights. Wigneswaran recalled that when TNTK was formed, he had invited the ex-cadres to take over the leadership of the party.

Wigneswaran criticized other Tamil parties like the Tamil National Alliance (especially its core, the Ilankai Tamil Arasu Katchi) for disregarding the former LTTE cadres and for keeping quiet in parliament when Sinhala MPs like Sarath Foneska and Manusha Nanayakkara were berating him for making Tamil nationalist remarks.  While Manusha Nanayakkara demanded that Wigneswaran’ statements not be entered in the Hansard, Fonseka even said that he would have to have to face the wrath of the Sinhalas.

Daily News quoted Fonseka as saying: “Denigrating the motherland in this House is a violation of the honor of this august Assembly. According to Wigneswaran, the oldest language in this country is the Tamil language. That means, according to him, the Sinhala people came to this country after the Tamils. I would like to remind him that we would never bow our heads to anyone who attempts to undermine the Sinhala nation and any such attempt to undermine the Sinhala nation would fail. Anyone who does so would not be able to exist in this country. Wigneswaran must remember that there were people in the past too, who tried to undermine the status quo of the Sinhalese. There was A. Amirthalingam who was in Parliament who instigated the Tamil youth against the Sinhalese. Finally, he got a bullet from the very same Tamil youth. Then there was Prabhakaran who thought that he could create a separate state in this country. You saw what happened to him. Unfortunately, despite his attempts, Wigneswaran cannot be Prabhakaran as he is too old to emulate Prabhakaran; he has no time left for it. Hence, I urge him to be satisfied with what he has and never try to undermine the Sinhalese. If you try to do that you’ll face unpleasant consequences and you will repent for your folly.”

Wigneswaran complained that when such threats to his life and limb were being made in parliament, other Tamil MPs were silent. Later, in an interview to the Sunday Observer, Wigneswaran said that if the Tamils do not get self-determination they will all become Sinhalas in 15 to 20 years. He pointed out that in Negombo and Puttalam such a loss of Tamil identity and absorption into the Sinahala community is already taking place.

While the Gotabaya Rajapaksa government plans to integrate the various ethnic and religious communities in Sri Lanka by ensuring equitable economic development and non-discriminatory policies, Wigneswaran has said that Tamils are not for “economic sops” but political autonomy.

On the alleged threat to the 13 th.Amendment he said that the Tamils would invoke India’s help as the 13A was the brainchild of India. But invoking India’s help will only further alienate  the Sinhalas who consider the 13A and the India-Sri Lanka Accord from which it stemmed as an imposition by the Big Brother across the Palk Strait at a time when Sri Lanka was weak with no friends to run to for help.

The 13A is opposed not only by Sinhala nationalists but by Sinhala intellectuals and the Sri Lankan media. These consider the Provincial Councils and the administrative set up in the provinces to be a White Elephant.

At the time of the Indo-Lanka Accord, a few militant groups like Eelam Peoples’ Revolutionary Liberation Front (EPRLF) supported the Accord and the 13A. The then influential Tamil United Liberation Front (TULF) led by stalwarts like A.Amirthalingam found the 13A to be inadequate. It did not contest the first election to the newly-  united Northern and  Eastern Province held in 1988 for security reasons. Later, the Eelam Peoples’ Democratic Party (EPDP), became an ardent supporter of the 13A and has remained so. But for most of the Tamils, then under the sway of the  LTTE, the Accord and 13A were “too little, too late”. Their eyes were set on an independent Tamils promised by the LTTE.

But now, after the crash of the independent Eelam dream, the Tamil parties are anxious over the fate of the 13A because the present Gotabaya Rajapaksa government enjoying a two thirds majority in parliament has the strength and the will to abolish it if it chooses to do so.

However, the government is unlikely to jettison the 13A wholesale. In the new constitution to be drafted, elements of the 13A will be kept while some unimplemented and unimplementable provisions like the grant of police and land powers to the provinces will be struck off. The Sri Lankan political class even in the Sinhala-majority South, sees the Provincial Councils (PCs) as a stepping stone to parliament. The PCs are an intermediate stage between elected local government institutions and parliament. They provide an avenue of political mobility.

The Provincial Councils are likely to stay albeit in an attenuated form, despite the fact that that the Minister for Provincial Councils and local government Rear Admiral (rtd) Sarath Weerasekara is a strong and consistent votary of the abolition of the 13A on Sinhala nationalistic grounds.

However, given the Sinhala majority’s opposition and the increasingly provocative Tamil nationalistic statements of Wigneswaran, the government might be compelled to take a tough nationalistic line on the 13A. If it is not abrogated altogether, there is danger of its being crippled and the powers now with the Provincial Councils might revert to the Central government. And Wigneswaran will be partly responsible for that.