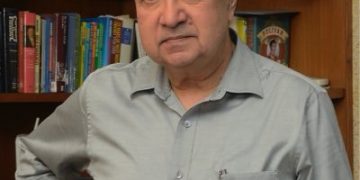 What The Hindu exposed about Rafale deal does not come under Official Secrets Act, says Chairman N.Ram

What The Hindu exposed about Rafale deal does not come under Official Secrets Act, says Chairman N.Ram Chennai, March 6 (PTI): Documents related to the Rafale deal were published in public interest and nobody would get any information from The Hindu on the confidential sources who provided them, The Hindu Publishing Group chairman N. Ram said on March 6.

The documents were published because details were withheld or covered up, the veteran journalist said as the government told the Supreme Court that documents related to the Rafale aircraft deal have been stolen from the Defence Ministry and an investigation into the theft is on.

Those who put documents on the Rafale deal in the public domain are guilty under the Official Secrets Act and contempt of court, Attorney General K.K. Venugopal said on March 6 before a Bench hearing a batch of petitions seeking a review of the court’s verdict dismissing all the pleas against the agreement on the fighter jet.

“I will not comment on the proceedings of the Supreme Court. But whatever we have published has been published. They are authentic documents. And they have been published in the public interest because these details have been withheld or covered up,” Mr. Ram said.

“…It is the duty of the press — through investigative journalism — to bring out relevant information or issues of great importance for the public interest,” he said.

India needs Rafale jets to defend the country “from Pakistani F-16 fighters that recently bombed us”, the government said today at an open court hearing on petitions asking the Supreme Court to review its clean chit to the fighter jet deal with France. “We need Rafale jets to defend our country from F-16 fighter planes that recently bombed us. Without Rafale how can we resist them,” the government’s lawyer, Attorney General KK Venugopal argued.

“Rafale fighter jets are needed, although MIG-21 of the 1960s performed beautifully against the F-16,” he added, referring to the dogfight after Pakistani aircraft crossed the Line of Control and tried to target Indian military installations. The air duel took place a day after India sent its fighter planes to target a terror training camp in Pakistan’s Balakot.

“Because of the urgency (the need for fighter jets), negotiations started for Rafale. The first batch is to be supplied in September and 52 pilots are to be sent to France for two-three months training. It is to protect the security of the country. But we are attacked,” said the Attorney General.

He said two squadrons of Rafale fighter jets were arriving in flyaway condition and added: “It is not for the court to intervene. Does Supreme Court know how many fighter planes we have?”

The government said documents linked to the Rafale deal had been stolen and petitioners were violating the Official Secrets Act by relying on classified documents. Petitioners like Prashant Bhushan had drawn the court’s attention to an investigative report by The Hindu.

“These documents were stolen from the Defence Ministry either by former or present employees. These are secret documents and can’t be in the public domain,” Venugopal said.

Chief Justice of India Ranjan Gogoi questioned what action the government had taken.

“We are investigating how these documents were stolen,” said the centre, accusing The Hindu newspaper of relying on these classified documents.

“It is a criminal offence. We are objecting preliminary because secret documents can’t be annexed with the petition. Review and perjury petitions must be dismissed,” said the Attorney General.

The Hindu, in the latest in a series of reports on the Rafale deal – the 36-jet purchase agreement at the core of the opposition’s allegations of massive corruption by the government – reports that the deal became more expensive for India because of France’s refusal to provide bank guarantees. The newsbreak by N Ram, Chairman of The Hindu Publishing Group, says the deal signed by Prime Minister Narendra Modi in 2016 for the aircraft and weapons packages for 36 fly-away Rafale fighter jets was more expensive by around Rs. 1,963 crore (Euro 246.11 million) than the estimated aligned cost of the 126 aircraft deal being negotiated by the previous Congress-led government.

The newspaper quotes a report of the Indian Negotiating Team (INT) to the defence ministry on July 21, 2016, and says it reveals how a parallel negotiating track weakened India’s position and bolstered the French.

The government said that documents marked secret were put out in the public domain.

The case will next be heard on March 14.

The petitioners have asked for a review after the Supreme Court said in December that there was no reason to doubt the decision-making process amid Congress allegations of corruption in the 2016 jet deal. The top court dismissed petitions alleging that the government had gone for an overpriced deal to help Anil Ambani’s company bag an offset contract with jet-maker Dassault. “There is no evidence of commercial favouritism to any private entity,” the court had said, adding that the perception of individuals “cannot be the basis of a fishing and roving enquiry by this court”.