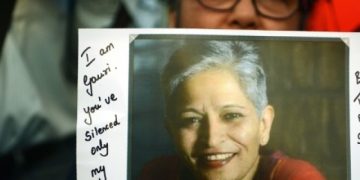 K.T. Naveen Kumar was arrested on suspicion of supplying the weapons used to kill Gauri Lankesh, according to a senior police officer, who asked not to be identified because he was not authorised to talk to media. More arrests are expected, he said.

Lankesh, the editor and publisher of the Kannada-language newspaper Gauri Lankesh Patrike, was shot dead outside her home in the southern city of Bengaluru in September.

The murder of Lankesh, a staunch advocate of secularism and critic of right-wing political ideology, sparked protests across India. Kumar, according to the police official, was a member of a hard-line Hindu group called the Sanatan Sanstha.

The group was earlier accused of being involved in the murder of a well-known atheist.

Officials at Sanatan Sanstha were not immediately available for comment. The Sanatan Sanstha, one of the many Hindu fringe groups, have gained prominence since Prime Minister Narendra Modi’s Hindu nationalist Bharatiya Janata Party came to power in 2014.

In an interview to Reuters in 2015, the members of the Sanatan Sanstha said they were preparing for the advent of a divine Hindu kingdom in India.