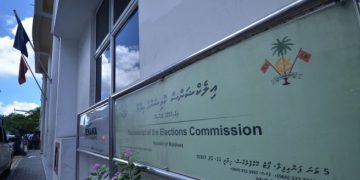 Maldives, April 6 (newsin.asia) – Voting got underway in the Maldives on Saturday in a crucial parliamentary election which will elect 87 members to the island’s Parliament.

According to the Maldives Elections Commission, some 386 candidates are competing for 87 seats in Parliament, also known as the People’s Majlis.
Some 264,442 people are eligible to vote.
According to Transparency Maldives, which is one of the main observers of the election, opening of the polls progressed smoothly with the administrative preparations prepared well.
Despite some delays, nearly all polling stations were opened before 9 a.m. local time and officials were in place.
Police presence was visible outside 81 percent of polling stations at the time of opening, Transparency Maldives said.
Local media reports said voter turnout was relatively low till Saturday noon. About 71,842 votes had been cast as of 12 noon, representing about 27 percent of the electorate.
Maldives President Ibrahim Mohamed Solih cast his vote in the morning at the Jamaluddin School in the capital.
Speaking to reporters after casting his ballot, he urged citizens to go out and vote.
The Elections Commission said 493 of the total 501 ballot boxes were situated in Maldives, while the remaining eight ballot boxes were located abroad in Sri Lanka, India, Malaysia and the UK.
Final results of the Parliamentary Elections is expected to be announced by April 12.
SendShare3Tweet1ShareShare