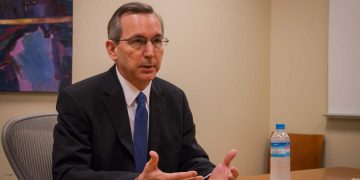 The US Ambassador to Myanmar, Scot Marciel, says that the US is not against Chinese investments in Myamnar but advocates caution to ensure financial transparency and protection of the country’s sovereignty.  In an exclusive interview to the Myanmarese website The Irrawaddy on a wide range of subjects Marciel also urged the Myanmarese government and the rebel groups to have informal talks first before going in for forrmal talks to build trust which is now lacking.

On Chinese investments in Myanmar, Ambassador Marciel said: “We don’t have a position on the Kyauk Phyu port. It is up to the Myanmar government and the Myanmar people to decide if something is in the interest of Myanmar. I know there has been a lot of discussion about it. And I think that is good. And I guess the other point I will make is that around the world, in places like Djibouti and so on, we have seen what started out of commercial projects become a little bit more than that.”

He further said: “It is important that these deals be negotiated and—if there is a deal—that Myanmar decides this is in the interest of Myanmar, the interests of the people of Myanmar, and does not compromise sovereignty. That would seem to me [to be] fundamental.”

But Marciel made it a point to add that the US is against China-funded project per se.

“We don’t want to say, Oh, because of Chinese involvement it’s bad. No, that is really not how we look at it. It’s (a question of): what’s the nature of the project?”

Asked what the US would do if the Chinese were to build a military base near Kyauk Phyu, the envoy said: “We don’t expect that to happen. I think the Myanmar government has made it very clear, publicly, many times, that it is not looking for foreign -not just Chinese, but foreign – military bases, and I believe that is true.”

Ambassador Marciel noted that China is a major factor in Myanmar and said that it is natural because China is Myamnar’s neighbor. He also noted that the government and people of Myamnar are considering certain aspects of foreign-funded projects in order to safeguard its sovereignty and economy.

“China is very active here. It’s promoting a lot of big projects. For me, what’s important is what the people of this country want. When it comes to big economic projects – whether funded by China or by anybody else – what I hear from the people here and what I hear from the government is: Is this in Myanmar’s interest? Is it a good project? Is it going to the follow rules? Is it going to hire local people to do the work? Is it going to protect the environment? Is it going to lead to debt?  Those are questions that I would think, and that I am pretty confident, that the government is asking, not only for Chinese-funded projects, but for any big projects.”

Ambassador Marciel did not reject outright the value of China’s Belt and Road projects but said that caution is called for.

“I think the experiences around the world and in the region suggest that there are some elements of Belt and Road Initiatives that seem to bring real benefits to the recipient country. And others seem to be quite problematic. I think that is just what we see. It is really important to do due diligence and have maximum transparency.”

US Not In Contest With China

Ambassador Marciel made it clear that the US “is not in a contest” in Myanmar or in the rest of the region.

Need For Democracy and Federalism

The envoy indicated that sustenance and promotion of democracy and federalism are America’s main preoccupation in Myanmar.

“We recognize Myanmar is strategically important, but for the most part over the years, the tremendous interest and support for democracy in Myanmar has been out of our admiration and respect for the incredible sacrifices that so many people here have made in the struggle to bring about human rights and democracy and rule of law. That has been a really important factor, and remains a very important factor in our policy. The goal of our policy is still consistent:  to support efforts to build democracy and peace, democratic federalism, and prosperity,” he said.

He pointed out to differences too. “ There are many elements in the current Constitution that are not really consistent with full democracy. We have had some challenges and some disagreements, particularly over things like Rakhine, in the last 18 months, but the underlying commitment to support the democratic transition and development of rule of law remains strong. We are still doing all of our programs to support this.”

“Sometimes this leads us to be fairly outspoken in our criticism, which can be popular at times and not so popular at other times. We think it is: a) true to our own values, and b) necessary for Myanmar to succeed as a democracy.“

The American Ambassador said that he found people in Rakhine supporting the Arakan Army (AA) but added that they do not want to break away from Myanmar either.

“We meet with a lot of people from the Rakhine community, including political figures, and the main message we got was that there seems to be quite a bit of support among the Rakhine community for the Arakan Army (AA). There was concern about what they allege were human rights violations [by] the Tatmadaw (Myanmar military) in the conflict with the AA. What we heard the same thing we had heard before the Arakan Army really increased its activity, which is complaints that the ANP [Arakan National Party] had won the election in 2015 but did not feel like they had sufficient voice in the government. I am not agreeing or disagreeing. I am just sharing that this is what we heard in general. A lot of frustration.It was disappointment and frustration, but nobody was saying:, we don’t want to be part of this country.”

“My own view is, ARSA (Arakan Rohingya Salvation Army) carried out the initial attacks. That’s a fact. We’ve condemned it. It was a disaster both because they attacked police and because of what it led to. There was a disproportionate response. Of course any country has the right to respond to an attack like that; nobody would suggest that they should have done nothing. It was the way in which it was done – rather indiscriminately and quite brutal, and with subsequent denial – that was really, really troubling. Myanmar’s not the first country whose security forces have had human rights violations.  Ours have too. What we would have hoped to see is more recognition that some things went terribly wrong,” the envoy said.

On the sensitive question of the citizenship of Rohingyas, whether they are native Myanmarese or Bangladeshi migrants, Marciel said that it is an “important, but separate issue.”

“But regardless of citizenship, they are human beings, so the question is, to what extent did widespread abuses happen? I think we still have this huge gulf unfortunately between the views of the Myanmar people and the views of the international community. Somehow, we need to find a way, as I said earlier, to have at least general agreement on the facts of what happened.”

He stressed the importance of giving access to the troubled Rakhine province to assess the human rights violations there so that the situation can be better understood and remedied for the larger good of Myanmar.

“Once we have the facts, then for there to be accountability for those abuses that took place; there’d be some justice. Ideally this would be led by a Myanmar domestic investigation, done in a way that is credible. Not only credible in the eyes of the international community, but also credible to the people in general.”

Need For Informal Dialogue Among Stakeholders

“We have supported the formal peace process from the beginning, including the NCA (Nationwide Ceasefire Agreement), and the idea for political dialogue to produce some commitments on federalism and democracy,” the envoy said.

He also stressed the need for behind-the-scenes informal dialogues which will help build trust. Formal meetings often end up with both sides reading their texts and not really negotiating, he said.

“Informal dialogue means people sitting around, ideally away from a formal negotiating table, and exchanging ideas and trying to build a little bit of trust. It has to mean people have to feel comfortable that whatever they say isn’t going to be repeated by the spokesperson the next day to the other side.”

(The featured image above is that of Scot Marciel, US envoy in Myanmar)