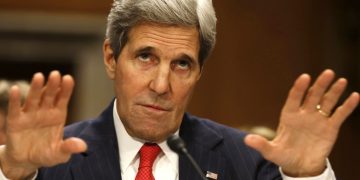 Dhaka, August 30 (The Daily Star): US Secretary of State John Kerry said here on Monday that the United States stands firmly by Bangladesh in its fight against militancy and both countries have agreed to increase cooperation between their intelligence agencies.

“We have to stand together,” Kerry said, emphasizing information sharing, constant communication and also good governance.

“We today agreed on additional steps by which our intelligence and law enforcement will work together in order to try to get ahead of this,” he said.

Kerry, who was on a nine-hour visit in Dhaka, called upon the Bangladesh government to step up efforts to fight extremist violence and at the same time ,protect and promote human rights.

Prime Minister Sheikh Hasina and Foreign Minister A.H. Mahmood Ali were very clear about their willingness to cooperate with the United States very closely in battling terrorism and violent extremism, he added.

In his speech at a mixed gathering after meetings with Hasina and Ali, Kerry said that elements of the Islamic State are “connected to some degree” with Bangladeshi militants.

“There is evidence that ISIL in Iraq and Syria has contacts with about eight different entities around the world, and one of them is in South Asia. They are connected to some degree with some of the operatives here and we made that very clear in our conversation. There was no argument about it,” he noted.

The Bangladesh government has all along maintained that there is no organizational presence of the Islamic State in the country and the recent terrorist attacks here are acts of home-grown militants.

However, a number of such attacks have been claimed by IS.

Replying to a query on Bangladesh government’s stance on these attacks, Kerry said when the government says it’s “home-grown” it’s not a foreign fighter who’s coming in to do it.

“It’s somebody here who’s chosen to do it. But that doesn’t mean it wasn’t influenced by elsewhere — on the internet, social media, and so forth.”

On July 1, this year, machete wielding young Islamic radicals from elite families of Bangladesh massacred twenty diners, including many foreigners, at an up market restaurant in Dhaka. Earlier, many bloggers who propagated secularism and liberal ideas were killed.

Call To Extradite Killers of Mujib

Prime Minister Sheikh Hasina requested the US to extradite the killers of Bangabandhu Sheikh Mujibur Rahman, the founder-President of Bangladesh. He was killed along with a large number of his family members, by a bunch of junior army officers on August 15, 1975.

Hasina  made the request to US Secretary of State John Kerry when he called on her at her office. Kerry replied; “I understand your sensitivity, the issue is under review.”

She also urged the US Secretary of State to allow duty and quota-free access of all Bangladeshi products to the US market.

Kerry observed that Bangladesh is moving ahead in line with the vision of Bangabandhu under Prime Minister Sheikh Hasina’s strong leadership.

He made the observation in the comment book at Bangabandhu Memorial Museum on Dhanmondi 32 during his visit there in the morning to pay his respects to the Father of the Nation Bangabandhu Sheikh Mujibur Rahman.

In the comment book, Kerry wrote: “ Bangladesh is growing in the vision of Bangabandhu – and under the strong leadership of his daughter. The United States is proud to be a friend and strong supporter of the fulfillment of his vision. We look forward to growing and working together for peace and prosperity.”

Addressing a gathering of civil society representatives, the youth, government officials, media and labor leaders at the Edward M Kennedy Centre in Dhanmondi, Kerry talked about the future of the US-Bangladesh relationship.

“I am not sure anyone would have predicted even a decade ago that our nations would be consulting closely on regional security, that Bangladesh would be using American cutters to patrol the Bay of Bengal, and that our shared agenda would include everything from counter terrorism to the environmental health and sustainability of our oceans, something we’re also working on together,” he said.

The culture of Bangladesh is one of the world’s most rich, diverse, and beautiful and it truly is a “Shonar Bangla” — a “golden Bangla”.

Senator Edward Kennedy had spoken up for the Bangladesh freedom struggle, Kerry said.

“Back in 1971, when the men and women of this beautiful land were under murderous attack — some across the globe wanted simply to look the other way. I was fresh out of college and fresh out of a war in Vietnam. And one of the things that made me proud was the way my home state Senator and my home State supported Bangladesh in its quest for independence and freedom.”

“At that time, when the violence was at its height, Senator Edward Kennedy flew to this region, visited the camps where refugees were gathered, and returned home to bear witness to what he called a systematic campaign of terror.”

“Early the next year, Kennedy returned and planted a banyan tree at Dhaka University, to replace the majestic one that rampaging soldiers had destroyed,” said the US Secretary of State recalled.

In 1971, the US President Richard Nixon and Secretary of State Henry Kissinger had  strongly backed their traditional ally Pakistan when East Pakistan (now Bangladesh) tried to breakaway. The US even set the US Seventh Fleet in motion but stopped short of intervening.

Addressing the US embassy officials in Dhaka, he said Kennedy had supported the independence of Bangladesh, as did people in his (Kerry’s) state of Massachusetts.

“So you’re serving here in Bangladesh in a very exciting time, a time of transformation, a time of huge possibilities, and yes, a time of challenge.”

“But believe me, not many people get the opportunity to get up every day and go to work and make a difference in the lives of other people, and that’s what you’re doing.”