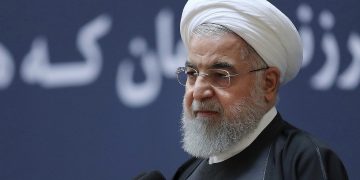 US sanctions add to the woes of coronavirus-hit Iran

US sanctions add to the woes of coronavirus-hit Iran Colombo, March 30 (Ceylon Today): Deaths due to the coronavirus are mounting in Iran as the US refuses to respond to Iran’s desperate calls for the lifting of sanctions, which have hit the Iranian economy hard.

Iranian President Hassan Rouhani’s brave words notwithstanding, a crippled Iranian economy is finding it very difficult to tackle the COVID-19 viral attack, which has, by March 18, claimed nearly 1000 lives and affected more than 17, 000 people, the highest in any country outside China, where the virus originated.

The US says that Iran must first release Americans and other foreigners unjustly jailed there. But the Iranians say that the US will also have to release Iranians held in America, a suggestion Washington rejects. According to the US, Iranians in US jails had gone through the due legal process, while the detention of Americans and dual citizens in Iran had been completely arbitrary. US Secretary of State Mike Pompeo had said that nations wanting to render humanitarian aid to Iran should do so only on the condition that the prisoners are released.

However, Iran’s Foreign Minister, Javad Zarif, had said in April 2019, that Iran had offered to swap prisoners six months earlier but the US was unresponsive.

On March 17, Pompeo continued his hardline and announced  that the US has imposed fresh sanctions on Iran, blacklisting nine entities based in South Africa, Hong Kong and China, as well as three Iranian individuals, for engaging in transactions in violation of existing sanctions. The US Commerce Department said it will add six people – including five Iranian nuclear scientists and 18 corporations to the US – to the “Entity List” for aiding Iran’s nuclear program. Without naming them, the Commerce Department said that the move covers one company in Iran, two entities in China, nine in Pakistan, and five in the United Arab Emirates.

Could Exemption Be Used?

There are exemptions for humanitarian aid in the US sanctions regime. Treasury Secretary Steve Mnuchin has said so too. But according to Human Rights Watch (HRW), in practice, these exemptions have failed to motivate US and European companies and banks to risk incurring sanctions and legal action by exporting or financing exempted humanitarian goods. Thus Iranians were denied access to essential medicines, the HRW pointed out in October 2019.

In May 2019, Atlantic Council had noted that “despite the fact that sanctions exempted humanitarian goods, the US Treasury Department had previously prosecuted medical companies for selling small amounts of medical supplies to Iran, which in turn, has had a deterring effect on other companies doing business with Tehran.” As on date, respiratory masks, surgical gowns, and ventilators are out of stock in Iran.

It is not as if the US has never breached its own sanctions to render humanitarian aid to Iran. And this can be done now too, if President Trump is willing. When in December 2003, a massive earthquake killed 26,000 people in the city of Bam in southeastern Iran, the Bush administration allowed a temporary suspension of sanctions and sent 150,000 pounds of medical supplies and more than 200 civilian personnel to assist Iran in search and rescue, emergency surgery, and disaster response operations.

With Trump being adamant about bargaining now, Iran is seeking and getting  support from other countries. Kuwait has allocated US$10 million. Thanking Kuwait for this, the Iranian Foreign Minister Javad Zarif called upon Kuwait to participate in a global campaign against America’s “medical terrorism”. He further said that the world can no longer be silent as US “Economic Terrorism” is supplemented by “Medical Terrorism.”

The Russian Foreign Ministry has condemned the US sanctions against Iran at this juncture as “anti-human” and alleged that the US is purposely hindering Iranian resistance to the virus. “The global pandemic is not a time for settling geopolitical accounts, especially those that have no basis, invented in Washington for the purpose of satisfying its ambitions,” Moscow said.

Javad Zarif urged Britain’s Foreign Minister Dominic Raab to defy the sanctions in accordance with its obligations under the Iran nuclear deal, known as the Joint Comprehensive Plan of Action (JCPOA). Following the Iran’s appeal, UK announced said that it would pay back with interest, an outstanding debt of £400 million it owes to Iran. Zarif thanked the European Union and the three EU parties to the JCPOA – Britain, France and Germany – for dispatching aid to Iran.

Zarif has written to the UN Secretary-General Antonio Guterres on the effects of the US sanctions.  “As the COVID19 ravages Iran, we should recognize that viruses don’t discriminate. To fight them, neither should humans discriminate,” Zarif told Guterres. Chinese Foreign Ministry spokesman Geng Shuang has urged removal of sanctions on Iran as this juncture, when it is fighting the coronavirus.

BBC On Impact Of Sanctions

According to Iranian President Rouhani, US sanctions have directly damaged the Iranian economy to the tune of US$ 200 billion in the past two years. A BBC report on the consequences of the US sanctions for Iran gives details.

The report says that in 2015, President Rouhani had agreed to enter into a deal with the US and five other world powers to limit Iranian nuclear activities in return for the lifting of sanctions. After the deal was implemented, Iran’s GDP grew at 12.3%. But the oil boom, on which the recovery rested, ended in 2017 and GDP growth fell to 3.7%.

In May 2018, after the nuclear deal broke, Trump reinstated US sanctions. The sanctions targeted the energy, shipping and financial sectors, which caused the plummeting of foreign investment and oil exports. US sanctions barred US as well as foreign companies from trading with Iran. With the economy down, the unemployment rate went up from 14.5% in 2018 to 16.8% in 2019.

At the start of 2018, Iran’s crude oil production was 3.8 million barrels per day (bpd) and it exported 2.3 million bpd. Most of the oil was bought by eight countries or territories which had been granted six-month exemptions by the US. These countries were China, India, Japan, South Korea, Taiwan, Turkey, Greece and Italy.

However, by March 2018, Iran’s oil exports had fallen to 1.1 million barrels per day on an average. Two months later, President Trump decided to allow the exemptions to expire and declared that he intends to “bring Iran’s oil exports to zero”.

Iran’s foreign currency reserves were down to US$ 86 billion, 20% below their level in 2013. Iran’s currency woes led to shortages of imported goods and products. Inflation soared to 30.5% in 2018. Food prices shot up by 61%. In November 2019, the government announced that it is cutting petrol subsidies which meant that petrol prices would rise by 50%. Petrol was rationed.

But the price rise caused widespread anger. Lakhs of people took to the streets across Iran. The crackdown by security forces which followed left at least 208  dead and thousands were injured, according to Amnesty International.

Having happened as recently as in 2019, another uprising cannot be ruled out if the coronavirus issue is not solved and the international community, especially the US, does not come to Iran’s aid. There is only so much that China and Russia can do to prop up Iran in these trying times. At the end of the day, Iran’s survival will depend solely on the lifting of US sanctions.

However, there was a faint light of hope at the end of the dark tunnel when US Secretary of State Pompeo said on May 17, that Iran will release American prisoners. If this turns out to be true, Iran will have been saved and the world, needing its oil desperately, will heave a sigh of relief.

But at the time of writing, there was no suitable response from Iran. In fact, in a belligerent speech, President Rouhani boasted about Iran’s military actions against the US and added that US sanctions had led to Iran’s learning to manage its economy without income from oil and produce a budget without depending on oil.