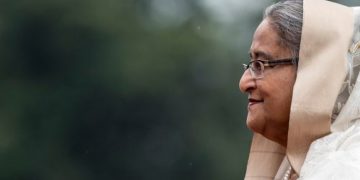 The elections to Bangladesh’s national assembly were far from credible. And as if the election results were not shocking enough—the Awami League bagging 288 seats while the main opposition BNP only managing to win five—the 47-member cabinet held more surprises than the proverbial Pandora’s box.

The total absence of the Awami League’s old guard from the cabinet is also astonishing in more ways than one. In place of some of the liberation-era worthies are fresh faces: of the 47 ministers whose names have been announced, 31 are new. Even loyal members of the Awami League-led mahajot (grand alliance) did not find berth in the cabinet.

Now that the elections are done and dusted, analysts have turned their attention to the composition of the new cabinet. Most Bangladeshis, including seasoned political analysts, are bewildered by the selection. Like a magician pulling a rabbit out of the hat, Hasina has conjured up a team that was unpredictable. What lay behind this surprise?

Considering the prevailing regional and global geopolitical scenario, it is common knowledge that big powers often have a hand in the domestic politics of small countries. The smaller countries are either manipulated or coerced by the ‘big brothers’ into falling in line to their advantage.

Historically India has a strong influence in Bangladesh and is particularly close to the Awami League, given the help it extended in the 1971 liberation war against its sworn enemy Pakistan. India has maintained close ties all along, but things seem to have taken a subtle change with China looming large on the regional and global front. China has emerged as a powerful global force to contend with and India, itself a significant regional power, is perhaps none too happy. India is seeing one neighbor after the other looking east towards Beijing, while gently pulling away from Delhi. Is this the case with Bangladesh too? Prime Minister Sheikh Hasina, being a wily player in the game of regional politics, seems to have tilted more towards China. Hasina’s new cabinet possibly has a subtle reflection of that move.

It certainly seems that the umbilical cord with India has snapped, or nearly so. What is also quite certain is that India is having to loosen its tight grip. Awami League veterans such as Tofael Ahmed, Amir Hossain Amu and other senior leaders like Hasanul Haq Inu and Rashed Khan Menon, who for long maintained independent links with the Indian establishment, be it with the administration or the security apparatus, have been left high and dry. These leaders had strong links with influential Indian quarters like former president Pranab Mukherjee, the Congress and other political stalwarts. This gave India a significant leverage and clout which now seems to be lost. The established ‘line of communication’ has been cut.

A small but significant number of the Awami League’s second rung leaders like Ashim Kumar Ukil, Mrinal Kanti Das, Shafi Ahmed et al, whom India ‘groomed’ as second line of defense has also fallen from Hasina’s grace. Party general secretary Obaidul Qader and newly appointed education minister Dipu Moni probably are the ones on the cabinet who maintain a good relationship with New Delhi. But with the latter given the education portfolio (previously she was heading the Foreign Ministry), she too would have little to contribute in ‘promoting’ New Delhi’s cause. Likewise, the new ministers given charge of important ministries are not known to have any organic links with India, given the closeness that Tofael Ahmed and Amu enjoyed.

Too much sidelining of these leaders seems a well-calculated move to keep India at a distance. It is said that India could and would maneouver and manipulate its dealings in Bangladesh through these leaders. With the likes of Tofael and Amu out of the scene, the communication lines have been virtually cut off. The only line of communication that remains is a direct one with Hasina. And that is, apparently, the way she wants it.

In the run-up to the elections, India limited its option by backing its traditional friend Awami League. The BNP, which earlier would play an anti-India card, this time around made a beeline for New Delhi. However, its overtures were ignored and many within the BNP felt they were taken for a ride. Ironically, it was the BNP that was originally in China’s good books. This time, the BNP missed the boat, so to say, when it tried to win Indian support rather than turn to its old friend in the neighborhood.

Some might look at the cabinet formation as the mother—Hasina—paving the way for the son – Sajeeb Wazed Joy, as her successor. These analysts believe that Hasina picked her cabinet in a manner that would be conducive for Joy to take over at an opportune moment. It is a cabinet that perhaps caters to his comfort.

However, there is a bigger picture in the scene. With India now at arms’ length, it is obvious that the ‘beneficiary’ is the neighborhood powerhouse, China. Having made vast investments and inroads into Bangladesh, it seems that China has effectively used its clout to isolate the power pivots of Indian influence. Through this move, China has successfully pulled Bangladesh away from its western neighbor.

China’s stakes are much higher than generally perceived. There is a perception that the Chinese are only interested in business opportunities in Bangladesh. With billions of dollars in investment for various projects in Bangladesh, including the massive Padma bridge among others, business certainly is important. However, there is a propensity to overlook China’s strategic penetrations. Added to their obvious investment interests, the growing geostrategic global significance of the Indo-Pacific region makes China all the more determined to have absolute control over whoever runs the government in Bangladesh. It would not want to see anyone close to New Delhi in key positions here. And hence a cabinet devoid of the Delhi diehards.

The Joy factor could well be a part of China’s strategy. While Hasina continued the tradition of strong ties with India, Bejing is trying to win over Joy. It seems that ever since stepping into the hurly-burly of politics Joy too has drifted towards China. Thus, with India-leaning leaders out of the way, and with China’s preference in place, things may be well set for Joy’s succession in due course.

But will it be smooth sailing? With India’s widespread tentacles in Bangladesh, it would be difficult to totally ignore it. Indian influence runs deep in most Bangladeshi institutions and New Delhi has the ability to stir up ‘unrest’ the country if it wants.

Meanwhile, given its own political system and state model, China does not have any reservations or qualms when it comes to democracy, one-party rule and human rights, or their lack thereof. A recent editorial in China’s Global Times was succinct. It wrote: “Western powers including the US and the EU on Tuesday denounced election day violence and a range of other irregularities that allegedly marred the electoral campaign, further fueling the opposition uproar.”

But the editorial also pointed out that China was quite happy with Hasina at the helm: “It is worth noting that Bangladesh under Hasina has maintained friendly cooperative relations with China. Lu Lang, spokesperson of the Ministry of Foreign Affairs, extended congratulations to the Awami League on winning the election under the leadership of Hasina saying China would like to work with the new Bangladeshi government to move forward the China-Bangladesh strategic partnership cooperation.”

China’s Belt and Road project is another important consideration for which it wants Bangladesh on its side. A China-friendly government in Dhaka will help reduce political risks to the Belt and Road projects. India is vehemently opposed to the project and so is the US. China would hardly allow any nuisance on its periphery and so there is all reason for it to ensure more than just a strong foothold in Bangladesh.

Winds of change are blowing over the China Sea towards Bangladesh and the Awami League is certainly tilting east. This explains the bravado the party displayed over the victory, despite overwhelming allegations of fraud.

(The featured picture at the top is that of Sheikh Hasin Wazed, Prime Minister of Bangladesh)