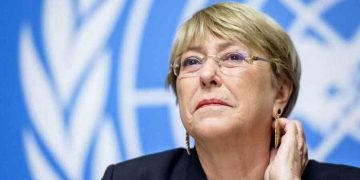 India’s mission in Geneva was informed on Monday evening by Bachelet’s office that it had filed an “intervention application in respect to the 2019 Citizenship Amendment Act (CAA)”.

The intervention petition was filed on Tuesday.

NDTV said this was the first time that such a petition has been filed.

The UN High Commissioner for Human Rights has asked the top Indian court to make it a party in the case against the CAA that is currently ongoing in the Supreme Court.

The intervention application is filed in the writ petition filed by retired IFS officer Deb Mukharji challenging the CAA.

The intervention application filed by Ms Michelle Bacehelet Jeria, states that the UN body wished to intervene as “amicus curiae” in the matter by virtue of its mandate to “protect and promote all human right and to conduct necessary advocacy in that regard… pursuant to UN General Assembly resolution 48/141”.

The OHCHR acknowledged that the CAA can potentially benefit thousands of migrants and that it had a “commendable purpose”. The applicant also clarified that its intervention should not be seen as an endorsement of the allegations raised by the petitioners in the proceedings before the SC.

At the same time, it said that the CAA raised certain important questions on international human rights law and its application to migrants, especially refugees.

“Under international human rights law, States must respect and ensure that migrants in their territory or under their jurisdiction or effective control receive equal and non- discriminatory treatment, regardless of their legal status and the documentation they possess”.

The enjoyment of Covenant rights is not limited to citizens of States Parties but must also be available to all individuals, regardless of nationality or statelessness, such as asylum seekers, refugees, migrant workers and other persons.

“States must ensure that their legislation, policies, and practice regulating access to citizenship and its application comply with the obligations enshrined in article 26 of the ICCPR, by providing migrants in the same situation equal protection as well as protection from discrimination, including on the basis of religion”.

The OCHR stated that question also arises as to “whether the differentiation made with regard to persecution on religious grounds, as opposed to other grounds, is sufficiently objective and reasonable, in particular taking into account the prohibition of refoulement and India’s obligations under international human rights law”.

In this regard, it observed that while reducing the risk of refoulement for certain communities, the CAA unequally places other communities at such risk.

“the narrow scope of the CAA, which extends protection from return only on religious grounds and limited to the specific ethno-religious groups, may not be sufficiently objective and reasonable in light of the broad prohibition of refoulement under international human rights law”, the OCHR stated.

“Without prejudice to the power of States to establish migration policies as a manifestation of their sovereignty, including.measures in favour of migrants that may be subject to persecution and other serious human rights violations/irreparable harm in their countries of origin or previous residence, States must ensure migration governance measures are in accordance with international human rights law, including the right to equality before the law, equal protection of the law and the right to nondiscrimination and the absolute and non-derogable principle of non-refoulement. Measures adopted that constitute a difference in treatment ought to be in conformity with the law, pursue a legitimate objective, and be proportional to the objective pursued”.

The differences in treatment based on religion or immigration status would constitute discrimination if the criteria for establishing that difference, judged in the light of the objectives and purposes of the rights enshrined in human rights treaties, do not apply to achieve a legitimate objective and are not proportionate to the achievement of that objective., stated the application.

Citing several UN reports, it was stated that the categories of persons excluded from the CAA, such as Ahmadi, Hazara and Shia Muslims, would warrant protection on the same basis as that provided in the preferential treatment proposed by the CAA.

In this backdrop, the UN body said that it seeks to assist the Court in examining the compatibility of the CAA with India’s Constitution, in light of India’s obligations under international human rights law. It said that it was inviting the Court to take due account of the of the “collective experience of the United Nations and its human rights mechanism

Immediately after the Act was passed by the Parliament in December last year, the UNHRC had issued a statement against it saying that it was “fundamentally discriminatory in nature”.

“We are concerned that India’s new Citizenship (Amendment) Act 2019 is fundamentally discriminatory in nature”, said the statement issued by Jeremy Laurence the Spokesperson of UN High Commissioner for Human Rights.

“The amended law would appear to undermine the commitment to equality before the law enshrined in India’s constitution and India’s obligations under the International Covenant on Civil and Political Rights and the Convention for the Elimination of Racial Discrimination, to which Indian is a State party, which prohibit discrimination based on racial, ethnic or religious grounds. Although India’s broader naturalization laws remain in place, these amendments will have a discriminatory effect on people’s access to nationality”.

It called for providing protection to all persecuted groups without discrimination based on identity:

“While the goal of protecting persecuted groups is welcome, this should be done through a robust national asylum system that is premised on the principle of equality and non-discrimination, and which applies to all people in need of protection from persecution and other human rights violations, with no distinction as to race, religion, national origin or other prohibited grounds”.

The government’s claim that the CAA will help non-Muslim refugees because Islam is the state religion in the countries listed (Afghanistan, Bangladesh and Pakistan) has been disputed by the petition.

Not The First Time

This is not the first time that the UN has urged India to take back the law. Last week the UN expressed concern over the recent deadly anti-Muslim clashes in New Delhi in which at least 46 have been killed and a mosque vandalized.

“We are following the situation closely,” UN Secretary-General’s Spokesman Stephane Dujarric had said in response to a question at the regular noon briefing at UN Headquarters in New York.

He underscored the need for Indian security forces to show restraint and to allow the protestors to demonstrate peacefully.

“This is the secretary-general’s constant position,” the spokesman added.

The CAA, passed by parliament in December, 2019 has been fiercely criticised by the opposition and activists as being anti-Muslim and violating secular tenets of the Constitution. It is also feared that the CAA, used with the NRC (national register of citizens) and NPR (national population register) can be used to further target Muslims.

Sustained nationwide protests, some of which have been led by students and women, have broken out since it was passed, with lakhs taking to the streets. A peaceful and weeks-long protest in Delhi’s Shaheen Bagh has emerged as the epicentre of these protests.

The protests have drawn the attention of students in foreign countries and celebrities like Pink Floyd co-founder Roger Waters, who this week called the CAA “fascist”.

Protests over the law also lead to horrific violence in Delhi last week, in which 48 people were killed and hundreds injured.

Shortly after it was passed the United Nations expressed concern over a law that it said was “fundamentally discriminatory in nature”. A spokesperson for the Office of the UN High Commissioner for Human Rights (OHCHR) said it would “have a discriminatory effect on people’s access to nationality”.

Prime Minister Narendra Modi, Home Minister Amit Shah and other BJP leaders have repeatedly defended the bill, which they say will help refugees. They say the opposition is spreading rumours and misinformation about the law for political gain.

Undeterred by the government’s claims, the CAA has been opposed by several non-BJP ruled states, such as Bengal, Kerala and Punjab. These states have passed anti-CAA resolutions and, in the case of the first two, have stopped work on NPR and NRC.

The Supreme Court is currently hearing a massive 143 petitions challenging the legal validity of the CAA. In a January hearing the court declined to put the law on hold and, instead, gave the central government four weeks to respond.

India’s External Affairs Ministry has condemned the move and argued that no foreign party has any locus standi on issues of India’s sovereignty and called it an internal matter.

The External Affairs Ministry hit back in a sharply-worded statement, declaring the CAA an “internal matter and saying “no foreign party had any locus standi on issues pertaining to India’s sovereignty”.

“The Citizenship Amendment Act is an internal matter and concerns the sovereign right of the Indian parliament to make laws. We strongly believe no foreign party has any locus standi on issues pertaining to India’s sovereignty,” the ministry said today.

“It is reflective of our long-standing national commitment in respect of human rights issues arising from the tragedy of the Partition of India,” the ministry said.

India has seen weeks of demonstrations and violence since the new citizenship law came into force in December with critics saying that it discriminates against Muslims.

The controversial citizenship bill gives amnesty to undocumented migrants belonging to the non-Muslim faiths from Bangladesh, Afghanistan and Pakistan.