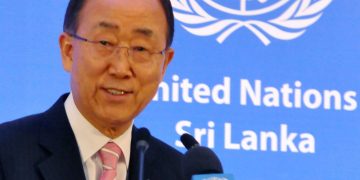 The UN Chief who was in the island for a two day official visit told journalists in Colombo that Sri Lanka had made ‘great progress’ since his last visit in 2009, but the island nation still faced a lot of challenging issues, even seven years after the war.
“Sri Lankans across the country have suffered too much from decades of violence. People now need to overcome these difficulties,” he said.
“Reconciliation cannot be accomplished overnight. This complex process requires continuous nurturing,” added.
Ban Ki Moon, who visited the former war torn north earlier in the day said that while he saw an enormous contrast from his visit in 2009, people were still suffering.
While he commended the unity government for taking steps towards truth seeking and accountability mechanisms, he stressed that the victims of the war deserved the truth, justice, security and prosperity.
“Victims cannot wait for ever. They deserve to have their voices heard. They deserve credible, transparent, and solid transitional justice mechanisms, he said. “UN offers its unwavering commitment to build a peaceful Sri Lanka.”
The UN Chief also admitted that there was a lapse and lack of involvement by the UN during the final stages of the war in Sri Lanka and that more lives could have been saved had the UN been more actively engaged.
Ban said that on the part of the UN, he established internal investigations into what had happened, what the people in the UN mission in Colombo had been doing at the time.
“We found serious mistakes in activities. Had we been more actively engaged we could have saved many more human lives,” he said.
During his two day visit, the UN Secretary General held discussions with President Maithripala Sirisena, Prime Minister Ranil Wickremesinghe, the opposition leader and parliamentarians.
He will depart for China on Friday evening.
SendShareTweetShareShare