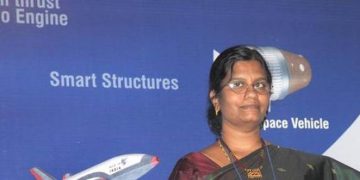 Chennai, July 22 (The Hindu): For many months now, Ms. Muthayya Vanitha has been almost anonymously (to the outside) steering the ₹978-crore Chandrayaan 2 lander mission to Moon, working around its complexities and seeing it to the finish.

All the while, ISRO has provided little information about the project director or key operatives of a mission that it proudly presents to the world. Said to be an ace data specialist, Ms. Vanitha of the U.R. Rao Satellite Centre is easily the only woman to head a prestigious planetary mission, having been part of the earlier Cartosat-1, Oceansat-2 and Megha-Tropiques teams.

Supporting Ms. Vanitha as mission director for spacecraft aspects is Ritu Karidhal also from the URSC. An IISc alumna, Ms. Karidhal was deputy director operations for the Mars Orbiter Mission of 2013.

There was a change of guard at the space launch centre at Sriharikota just two weeks before the D-day of Chandrayaan 2.

Pandian superannuated as the director of Satish Dhawan Space Centre on June 30. ISRO brought in S. Rajarajan from the launch vehicle centre in Thiruvananthapuram, VSSC, to send off the mission.

“The systems take care of such transitions,” said an official. The launcher team is led by VSSC’s Jayaprakash. Directors of its key centres, S. Somanath of the VSSC which provided the GSLV MkIII launcher for the mission;

P.Kunhikrishnan, whose URSC holds the key to spacecraft and lander functions; and V.V.Srinivasan, whose tracking centre ISTRAC in Bengaluru will handle vital post-launch manoeuvres of the spacecraft, have stayed in the shadows of the lunar mission.

(The featured image at the top shows Muthayya Vanitha)