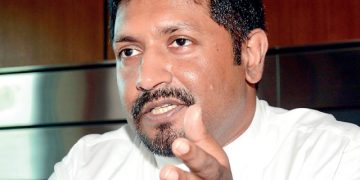 Apart from the already identified National Tawheed Jamaat, (NTJ), there was another group which had split from it, but cooperated with it in Sunday’s bombing of two posh hotels in Colombo and three churches in Colombo, Negombo and Batticaloa.

The blasts claimed 359  lives, 39 of them foreign nationals. Seventeen of the bodies of foreigners have been identified.

Wijewardene declined to name the second group, saying that it had to be kept under wraps as investigations were still on. But he said that the unnamed second group is the more radical of the two. It had split from NTJ sometime back. Nevertheless, this group and the NTJ cooperated in Sunday’s bombings.

It was the leader of the radical splinter group who had led the  joint operation. Thisman blasted himself in Shangri-La Hotel in Colombo. The hotel is now closed indefinitely.

The leader was among the eight suicide bombers whose bodies had been identified.  Altogether there had been nine suicide bombers, including a woman. She was the wife of one of suicide bombers. She had triggered her belt bomb when police raided her house in Dematagoda after getting the address from the hotel he had checked into.

The fate of Moulavi Mohammad Zahran Hasim, leader of the National Tawheed Jamaat, is not known yet, as his body is yet to be identified. However it is believed that he too had died setting off a belt bomb.

Minister Wijewardene said that the suicide bombers were all Sri Lankans, came from various parts of the island, and were highly educated persons from middle and upper class families.

“One of them had a Master’s in law, had been educated in the UK and worked in Australia  before coming back to Sri Lanka,” the Minister said.

He expressed his ability to reveal the names of the suicide bombers and others in custody.

Police spokesman Ruwan Gunasekera said that 60 persons are in detention, out of whom, 38 are being interrogated by the Criminal Investigation Department (CID).

“Our aim is to get to the local and foreign connections of the two groups and the nature of the cooperation between the individuals and groups suspected to be involved,” Wijewardene said.

He admitted a major security lapse had occurred as prior information was available from India and other foreign sources.

“The police who had received prior warnings from India and other  sources, did not communicate the information to me or  the Prime Minister,”  Wijewardene said.

But he added that the police had been monitoring the NTJ and the other un-named group for the past three years.

“We knew that they were involved in radical propaganda but we did not imagine that they would go to the extent of committing acts of terror like this. Previously, they had only vandalized  Buddha statues, attacked a Hindu temple and a church and got involved in minor skirmishes, but nothing on the scale that we saw on Sunday,” he said.

On the role of the Islamic State of Iraq and Syria (ISIS), which has claimed responsibility for the bombings, the minister said that the investigators are trying to find out if the ISIS and other foreign groups were indeed involved in motivating, funding, technically assisting and even participating in the attacks.

“But as of now it appears that the ISIS’ role has been primarily motivational,” the Minister said.

Wijewardene also said that the bombers had wanted to avenge the bombing of a mosque in Christchurch in New Zealand by a White Christian man.

In view of possible foreign involvements many countries have offered to  cooperate and share expertise. “The FBI and a British team are here. We have constant inputs from India too,” he said.

He said he was not aware of a second group arriving from another country but said that vigilance is called for.