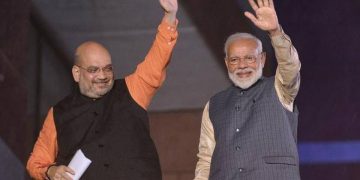 The political wave which engulfed most of India on May 23 has been aptly named “Tsunamo” – a Tsunami like Narendra Modi wave which caused unexpected and unprecedented electoral destruction as it swept across the country.

“Namo” in “Tsunamo” is short for Narendra Modi, the iconic leader of the Bharatiya Janata Party (BJP) and the Prime Minister of India.

On the all-India plane, the “Tsunamo”, has caused the demolition of the Congress party led by Rahul Gandhi. He himself lost the election in Amethi in Uttar Pradesh, though he  won convincingly in Wayanad in Kerala.

At the State level, the Tsunamo badly damaged an opposition citadel like the Trinamool Congress in West Bengal led by the fiery Mamata Banerjee.

During the month-long election process, the ruling BJP led National Democratic Alliance (BJP-NDA)  was not expected to get even the minimum 272 seats out of the 542 up for grabs. It was expected to fall short by 30 to 60 seats, a shortfall it was expected to make up by enlarging the NDA to include more parties.

The BJP-NDA government was not given the clean chit by economic experts and left-oriented commentators. They saw the demonetization of 85% of India’s cash and the introduction of the cumbersome All India Goods and Services Tax as having caused an immense burden on the rural man and the small businessman.

Neglect of agricultural finance had led farmers to commit suicide in States ruled by the BJP-NDA. The Muslims and the lowest caste of Dalits were being lynched by government-backed Hindutva vigilantes for carrying beef or taking cows for slaughter because they “hurt Hindu sentiments about the Holy Cow.”

The BJP-NDA lost by-elections in Uttar Pradesh, a State which it had swept both in the parliamentary and State Assembly elections held earlier.

But despite all this, the exist-polls published last Sunday, predicted a stunning victory of the BJP-NDA. The coalition was slated to win 267 to 350 seats in a House of 542. It  was expected to do well even in the States which it had recently lost.

Commentators either laughed at this or tried to explain that Modi’s “mini war” air war against Pakistan as a riposte to the killing of 44 paramilitary personnel in Kashmir, had won him kudos. He was seen as a “strong man” who would teach Pakistan, which was accused of unleashing cross-border terrorism on India, a “fitting lesson”.

It was also said that national security issues demanded a strong leader who would make a “virtue of hate” and not a leader like Rahul Gandhi of the Congress who was touting the idea that matters should be sorted out by “love” and not “hate”. Nothing excites and unites like “hate” and it did.

A resurgent middle and upper class India, dreaming of world and regional power status for their country, found Rahul Gandhi  not be the man of the moment, despite his secularism, and the soundness of his economic criticisms.

The results predicted by the exit polls had also taken into account the splintering of the non-BJP-NDA votes. An early attempt to bring all the non-BJP-NDA parties together by the West Bengal leader Mamata Banerjee failed because the Congress did not cooperate. Wanting to be the number one, as before, the Congress did not join the Trinamool Congress grand scheme. The Congress and the Communist parties also decided to take on Trinamool Congress in West Bengal knowing fully well that if they did,the BJP will gain.

In Uttar Pradesh, which has the single largest number of seats in parliament, the Congress did not make an effort to join the Grand Alliance called “Mahaghatbandhan” partly because the powerful Bahujan Samaj Party (BSP) leader Mayawati was averse to working with the Congress.

With the Congress left out in the cold the Muslims (15 % of the population) had begun to lean towards the Mahaghatbandhan which showed promise.

In Rajasthan, Madhya Pradesh and Chattisgarh, in which the Congress was successful in State-level elections, BJP’s leader Modi was seen as a more suitable national leader than Rahul  Gandhi or any other leader of the opposition. The voters here had apparently drawn a distinction between local and national elections, the latter involving not non-local but national issues.

Sure enough when counting of votes began on May 23, the results reflected the projections made on the basis of the exit polls released on May 19.

By the midnight of May 23, the BJP-NDA won in 341 of the 542 seats, Congress-UPA got  95, and others 88 seats. Everybody concluded that the BJP-NDA had won and congratulated Modi.

The BJP-NDA had swept the polls in all the North Indian States in which it was defeated in the recent State Assembly elections as in Rajasthan, Madhya Pradesh and Chhattisgarh.

The BJP-NDA has taken Gujarat and Maharshtra too.

Many political personalities of the Congress-UPA, including Rahul Gandhi,  have lost. Rahul lost Amethi in UP but won in Wayanad in Kerala. His mother and former Congress President Sonia Gandhi managed to make it in Rae Bareily in UP. This is the first time Rahul has lost Amethi since he began  contesting elections in 2004. His sister, Priyanka Vadra, who was made Congress General Secretary in charge of UP. She did not contest but did not succeed reviving the party in UP either.

In Odisha, out of the 21 seats, the Biju Janata Dal (BJD) won 4, the BJP-NDA 3, and Congress-UPA 1. The BJD was leading in most seats though.

However, good news came to the Congress-UPA from South India where it swept the polls in Kerala. In Tamil Nadu its ally, the Dravida Munnetra Kazhagam-led coalition,  won 37 out of 39 seats.

The BJP-NDA as well as the Congress-UPA were defeated in Andhra Pradesh and Telengana too. In Andhra Pradesh the Telugu Desam was surprised by the showing of the YSR Congress Party led by Jaganmohan Reddy.In Telegana, the Telengana Rashtriya Samithi re-affirned its hold over the people. The TRS had agitated for the creation of Telegana State, a long standing demand of the people of the area.

In the South, Tamil Nadu,  Odisha and Sikkim, local factors appeared to have played a role and the regional parties were in the running here rather than national parties like the BJP or the Congress. The issues which concerned the Southern voters were different from those which concerned voters in the North, West and East.

Rahul Gandhi has said that the question of his continuing as Congress President will be decided by the Working Committee whenever it meets. He has accepted the results gracefully without raising issues like tampering with Electronic Voting Machines.