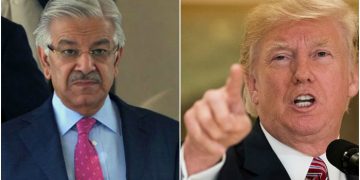 by Editor
in Around South Asia, Around The World, Pakistan, Top Story
Reading Time: 1 min read
1 0 Washington/Islamabad, January 1 (Geo News):  Issuing a tough warning to Pakistan, U.S. President Donald Trump on Monday alleged that this South Asian nation has given America nothing but lies and deceit and has given safe haven to terrorists. But the Pakistani Foreign Minister Khawaja Asif, said in response that Pakistan has already refused to ‘do more’ for the United States.

“The United States has foolishly given Pakistan more than 33 billion dollars in aid over the last 15 years, and they have given us nothing but lies & deceit, thinking of our leaders as fools,” Trump said in a strongly worded tweet.

“We have already told the US that we will not do more, so Trump’s ‘no more’ does not hold any importance,” Asif said in an exclusive interview with Geo News.

“Pakistan is ready to publicly provide every detail of the US aid that it has received,” Asif said in a strongly worded statement in response to Trump’s tweet that accuses Pakistan of providing safe havens to terrorists that the US is hunting in Afghanistan.

“Trump is disappointed at the US defeat in Afghanistan and that is the only reason he is flinging accusations at Pakistan,” the foreign minister said.

“The US should try to negotiate with Taliban in Afghanistan instead of using military force,” he added.

Soon after the US president took to twitter to make serious accusations against Pakistan, Asif had said that he would let the world know the truth.

He had further said that there is a difference between facts and fiction.