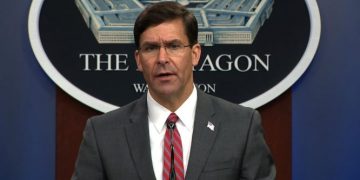 Washington, November 9: President Trump on Monday fired Defense Secretary Mark T. Esper, the latest casualty in the president’s revolving door of top national security officials who fell on the wrong side of their boss,  Helene Cooper and Eric Schmitt reported in the New York Times.

Mr. Trump announced the decision on Twitter, writing in an abrupt post that Mr. Esper had been “terminated.”

The president wrote that he was appointing Christopher C. Miller, whom he described as the “highly respected” director of the National Counterterrorism Center, to be acting defense secretary. Mr. Miller will be the fourth official to lead the Pentagon under Mr. Trump.

The president noted that Mr. Miller had already been approved by the Senate for his current position, perhaps as a way to argue that the firing of a defense secretary should not be viewed as a sign of turmoil in the highest ranks of the nation’s national security structure.

Mr. Esper’s departure means that Mr. Miller would — if he lasts — see out the end of the Trump administration at the Pentagon. While Mr. Trump has over two months left in office, it could still be a significant time, as Defense Department officials have privately expressed worries that the president might initiate operations, whether overt or secret, again Iran or other adversaries in his waning days in office, the New York Times said.

Friends and colleagues praised Mr. Miller’s Army Special Forces background and counterterrorism credentials but expressed surprise that he had been elevated to such a senior position, even in a temporary capacity. And while he is not considered an ideologue, Mr. Miller does not have the stature to push back on any extreme positions that Mr. Trump might advocate in his final weeks in office, colleagues said.

“A move like this probably sends a chill through the senior ranks of the military,” Nicholas J. Rasmussen, a former top counterterrorism official in the Bush and Obama administrations, said in an email. “Not because of anything about Chris Miller personally, though it’s a highly unconventional choice, to be sure. But simply because a move like this contributes to a sense of instability and unstable decision-making at exactly the time when you want to avoid sending that kind of message around the world.”

Mr. Miller is a former Army Green Beret who participated in the liberation of Kandahar early in the war in Afghanistan. He also previously served as the top counterterrorism policy official in the National Security Council under the Trump White House. After that job, he briefly served in a top counterterrorism policy role at the Pentagon this year.

He has been part of the Trump administration’s musical chairs on national security posts. It was only in August that Mr. Miller was named to replace Russ Travers, who was the acting head of the counterterrorism center.

Mr. Miller began his military career as an enlisted infantryman in the Army Reserve in 1983. He also served as a military police officer in the District of Columbia National Guard. He was commissioned as a second lieutenant in 1987 and became an Army Green Beret in 1993.

In addition to his deployment to Afghanistan, he also served in Iraq in 2003, both with the Fifth Special Forces Group.

In announcing that he was firing his defense secretary, Mr. Trump sought to reclaim even a bit of the postelection narrative, which has been dominated by President-elect Joseph R. Biden Jr.’s victory.

But Mr. Esper’s downfall had been expected for months, after he took the rare step in June of disagreeing publicly with Mr. Trump and saying that active-duty military troops should not be sent to control the wave of protests in American cities. The president, who had threatened to use the Insurrection Act to do exactly that, was furious, officials said.

Mr. Esper’s spokesman tried at the time to walk back the damage, telling The New York Times that Mr. Trump did not want to use the Insurrection Act either, or he would have invoked it already. “We fail to see the disconnect,” said Jonathan R. Hoffman, a spokesman for Mr. Esper.

Mr. Esper, 56, a former secretary of the Army and a former Raytheon executive, became defense secretary last July, after Mr. Trump withdrew the nomination of Patrick M. Shanahan, the acting defense secretary, amid an F.B.I. inquiry into allegations from Mr. Shanahan’s former wife that he had punched her in the stomach. Mr. Shanahan denied the accusations.

Mr. Shanahan had been standing in for Jim Mattis, who resigned as defense secretary in 2018, citing his own differences with the president.

Mr. Esper had taken pains to hew to the Trump line during his tenure. But concern over invoking the nsurrection Act to send active-duty troops to battle protesters across the country was deep in the Pentagon. Under heavy public criticism, Mr. Esper ultimately broke with the president.

Mr. Trump has referred to Mr. Esper as “Mr. Yesper.” Ironically, it was the defense secretary’s public break with the president during a news conference in June in which he spoke against use of active-duty U.S. troops to quell civil unrest that infuriated Mr. Trump to begin with. Those comments came after Mr. Esper had accompanied Mr. Trump on his walk across Lafayette Square outside the White House, where protesters had just been tear-gassed, prompting condemnation from former military and civilian Defense Department officials.

By midsummer, Mr. Esper was walking a fine line to push back on other contentious positions involving the military that Mr. Trump had taken.

The Pentagon, without once mentioning the word “Confederate,” announced in July that it would essentially ban displays of the Confederate flag on military installations around the world.

In a carefully worded memo that Defense Department officials said was written to avoid igniting another defense of the flag from Mr. Trump, Mr. Esper issued guidance that listed the types of flags that could be displayed on military installations — in barracks, on cars and on signs.

The guidance did not specifically say that Confederate flags were banned, but it said they did not fit in any of the approved categories — and any such flags were prohibited.

After the events in June, Mr. Esper sought to fly under the radar, avoiding the news media and keeping a low profile to prevent being pulled into election politics.

He traveled often beginning in early summer, including overseas trips to North Africa, the Middle East and India.

But the secretary deliberately limited his public comments while on the road.

When he did speak in public, either abroad or in Washington, it was often in pre-recorded remarks on safe subjects (criticizing China and Russia on the Africa trip) or in friendly venues (a question-and-answer session on military readiness at The Heritage Foundation, where Mr. Esper had served as its chief of staff).

Yet on the single biggest issue of 2020 — the coronavirus pandemic — history may show that Mr. Esper has, by far, outperformed his boss, who largely refused to wear a mask and contracted the coronavirus during an outbreak at the White House. Mr. Esper, by contrast, has strictly adhered to guidelines from the Centers for Disease Control and Prevention on wearing a mask when unable to keep a recommended social distance, the New York Times said.

At a Pentagon virtual town-hall-style meeting, Mr. Esper responded to a sailor on the aircraft carrier Gerald R. Ford who complained that the required social distancing onboard the ship was hurting morale.

“It is tedious — I understand that,” Mr. Esper said. “But I think it’s showing, in terms of the Navy’s results in terms of infection rates, that they’re doing a very good job.”