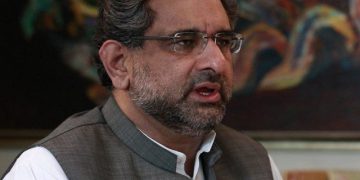 Touchy about assault on Supreme Court, Pakistan is non-committal on Maldivian crisis

Touchy about assault on Supreme Court, Pakistan is non-committal on Maldivian crisis Islamabad, February 10 (newsin.asia): Pakistan was apparently non-committal in its reaction to the crisis in the Maldives when the Maldivian Special Envoy, Foreign Minister Dr. Mohamed Asim, met Prime Minister Shaheed Khaqan Abbasi during a three day visit which ended on Saturday, according to an exclusive report in The Express Tribune.

To be sure, Abbasi assured that (in contrast to India perhaps) as per the UN charter, Pakistan will not interfere in the internal affairs of the Maldives. But the official Pakistani press release did not say that Pakistan will support President Yameen in his conflict with the opposition leaders and the Supreme Court.

However, according to The Express Tribune  a close aide of Prime Minister Abbasi said that Pakistan could not support Yameen’s assault on the Supreme Court as his party, the Pakistan Muslim League (Nawaz), was dead against former President Gen.Pervez Musharraf’s punitive  actions against the then Pakistan Chief Justice.

Musharraf had to quit office as a result of a popular agitation in favor of the Chief Justice.

Even though the Maldivian minister landed on Friday, his visit was kept on low-key by the federal government authorities mainly due to the controversies attached to Maldives president’s decision to impose a State of Emergency in his country.

An official source in knowledge of the matter said PM Abbasi conveyed to the visiting foreign minister that Pakistan had no intention to side with Maldives president after he took a highly controversial step to impose emergency.

“Our government is vocal about condemning the proclamation of emergency by former dictator General (retd) Pervez Musharraf in 2007 in Pakistan, mainly to tighten noose around the Supreme Court judges.’

“So  , how can we support the proclamation of emergency in Maldives where the Supreme Court is also bearing the brunt?” a close aide of the prime minister commented, requesting anonymity.

The source said the visiting minister had invited the Premier to visit Maldives but Abbasi ‘politely regretted’ the invitation saying it was not suitable to visit the country in the present circumstances since such a step would be tantamount to supporting the State of Emergency.

The Maldivian Foreign Minister briefed the PM on the “developments that led to the declaration of a State of Emergency in his country.”