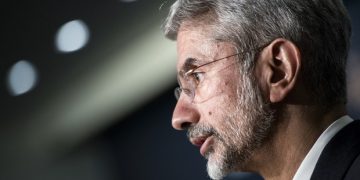 In a tit for tat diplomatic row, India hits Pakistan where it hurts most: demands Pakistan-Occupied Kashmir

In a tit for tat diplomatic row, India hits Pakistan where it hurts most: demands Pakistan-Occupied Kashmir New Delhi, August 19 (The New Indian Express/NIA): In a tit for tat diplomacy signifying worsening relations between the two countries, India on Thursday reacted to Pakistan’s brazen interference in the troubled Northern Indian state of Kashmir by threatening to put on the front burner the issue of the independence of Pakistan’s Balochistan province.

India has also hinted that it might, at the appropriate stage, recognize a Balochistan government-exile.

Indian Foreign Secretary Subrahmanyam Jaishankar in a detailed letter addressed to his counterpart, Aizaz Ahmed Chaudhary (dated August 16 and handed over on August 17), put forth five points on the agenda for the proposed talks besides seeking a briefing from Pakistan authorities on the progress made in bringing the perpetrators of 26/11 Mumbai attack and the Pathankot strike to book.

“The Foreign Secretary also said that he looks forward to discussing with his counterpart the earliest possible vacation of Pakistan’s illegal occupation of the Indian state of Jammu and Kashmir,” Ministry of External Affairs Spokesperson Vikas Swarup said on Thursday.

India had moved the United Nations after armed raiders backed by the then Pakistani establishment invaded the state of Jammu and Kashmir right after independence in 1947 and a part of the state has been under control of Pakistan since then. New Delhi has maintained that the area is under illegal occupation.

Swarup was elaborating on India’s stand on Pakistan’s call for talks and said the issue of cross-border terrorism and prosecution of internationally proscribed terrorists figured in the letter sent by Jaishankar.

“Cessation of cross-border terrorism by Pakistan aimed at Jammu and Kashmir, ending incitement to violence and terrorism in Jammu and Kashmir, detaining and prosecuting internationally recognized Pakistani terrorist leaders who have been publicly active recently, closing down of Pakistani terrorist camps where terrorists such as Bahadur Ali, recently arrested in J&K, continue to be trained and denying safe haven, shelters and support to terrorists in Pakistan who have escaped Indian law,” were termed as the “pressing aspects” of the situation in Jammu and Kashmir.

Meanwhile, India has denied permission to the office of the UN Human Rights High Commissioner to visit Kashmir saying that it has been “constructively engaged with the UN body to project a correct picture of the state.”

“The Indian Mission in Geneva has been constructively engaged with the UN body to project a correct picture of Jammu and Kashmir by highlighting the central role of cross-border terrorism and its glorification in the violent protests in the Valley,” Swarup said.

The MEA, which was directed by the Prime Minister to get in touch with Baloch leaders across the globe to highlight the atrocities committed by Pakistan in the region, is keeping its cards on the issues under the wrap. Swarup said “let us not jump the gun”, when asked if India would support a “Balochistan government-in-exile”.