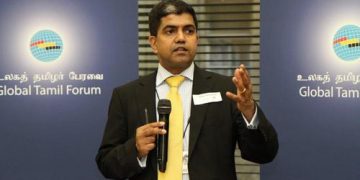 London, March 3 (newsin.asia): The Global Tamil Forum (GTF) has urged the on-going 37 th.Session of the UN Human Rights council (UNHRC) in Geneva to “impress upon Sri Lanka to present a comprehensive transitional justice strategy, including a clearly defined timeline for implementation.”

A statements issued by Suren Surendiran, spokesman of the GTF on Saturday said:  “The warning signs are all there.  Almost nine years after the end of the war and two and a half years after co-sponsoring a UNHRC resolution calling for comprehensive transitional justice measures, the Government of Sri Lanka has not taken meaningful steps to inspire confidence of its commitments and intentions. “

“The Office of Missing Persons (OMP), the only transitional justice process Sri Lanka has contemplated to-date, has not been operationalised more than a year and a half after it was legislated. The constitutional reform process appeared to be in a standstill.”

“The recent Local Council elections show the desperate need for enlightened political leadership to prevent the re-emergence of communal-antagonistic politics. It is in this context that the ongoing UNHRC session is highly significant for the future wellbeing of all the peoples of Sri Lanka.”

“Without agreeing to such a plan, Sri Lanka meeting its commitments before the comprehensive review in a year’s time is virtually zero.”

“ This action plan should include confidence building measures – demilitarisation, land and prisoner release and the repeal of the Prevention of the Terrorism Act (PTA), and key transitional justice measures – immediate operationalising of the OMP, establishing a credible judicial mechanism that incorporate a special counsel, foreign judges and authorised prosecutors and investigators, and setting-up impartial arrangements to address truth-seeking and reparation.”

“It is time the international community stopped accepting the multitude of reasons Sri Lanka has been sighting (potentially this may include the recent Local Council elections on this occasion), and seriously consider alternative measures, either through other organs of the UN or through effective governmental initiatives.”

“Vetting procedures and travel restrictions on those individuals identified with war crimes and serious human rights abuses is an important first step in this direction.”

“Once again GTF would like to quote the UN High Commissioner, who urged ‘the Human Rights Council to continue to play a critical role in encouraging progress in accountability and reconciliation in Sri Lanka’ and went on to call upon ‘Member States to explore other avenues, including the application of universal jurisdiction that could foster accountability.’

The stakes are high for the people of Sri Lanka, and indeed for the region, to be conflict-free and remain in sustained peace. International inaction is not an option.”

The Global Tamil Forum (GTF) welcomes the report provided by High Commissioner Zeid (Jan. 25, 2018) on the progress made by Sri Lanka in implementing the UNHRC resolutions it co-sponsored. As per his report, “The fulfilment of the transitional justice commitments made under resolution 30/1 has been virtually stalled for more than a year.  Progress with some confidence-building measures has often been insufficient and inconclusive, and …………did not receive sufficient political support to move things forward.” The report further stated, “The lack of sufficient progress in implementing critical confidence-building measures, such as the release of land, the repeal of the Prevention of Terrorism Act and the solution to the pending cases under the Act, have antagonized key constituencies that could be instrumental to the Government’s reform efforts.”

By providing an overview of a limited, well-known emblematic cases, High Commissioner argued that “The authorities have not yet demonstrated the capacity or willingness to address impunity for gross violations and abuses of international human rights law and serious violations of international humanitarian law” and that “the failure to show major progress in these emblematic cases strengthens the argument for the establishment of a specialized court,……………, staffed by specialized personnel and supported by international practitioners.”

(The featured image at the top shows Suren Surendiran, spokesman of the Global Tamil Forum)