Is Nepal’s geo-strategic location a bane or a boon?

Token system to distribute fuel from today in Sri Lanka

Schools will remain closed in Colombo zone from 27th to 1st

Modi on his mother

Srinagar ,September 18 (NIA): Terrorists, who had presumably infiltrated into India-held Kashmir from Pakistan across the Line of Control (LoC), attacked an Indian army administrative base in Uri, killing 17 soldiers, in the wee hours of Sunday. Indian authorities said that troops killed all the four terrorists who had intruded.

The attack took place as India asked the Non-Aligned Movement’s summit in Venezuela to set up a “mechanism” to coordinate anti-terror operations of member countries, describing cross-border terrorism as the greatest threat to any nation’s sovereignty ,peace and economic development.

On the terrorist strike at Uri in Kashmir, the Indian army’s Northern Command said: “On the early hours of 18 September, a group of heavily armed terrorists targeted the rear administrative base of an  army unit at Uri, Kashmir. In the counter action, four terrorists have been eliminated and combing operations are in progress.”

“The administrative base had a large strength of troops of units turning over after their tour of duty who were stationed in tents/temporary shelters which caught fire, and resulted in heavy casualties. We salute the sacrifice of 17 soldiers who were martyred in the operation.”

Indian Defence Minister Manohar Parrikar and Army chief General Dalbir Singh Suhag rushed to Srinagar in view of the gravity of the incident.

The four terrorists are believed to have sneaked into the Indian Army base around 3.30 a.m and about 20 minutes later, a major explosion was heard as the Fidayeen (guerillas) hurled grenades into barracks were some Army men were asleep.

Hurling grenades and firing randomly, the militants inflicted maximum damage. With the army retaliating, intense gun battles ensued which continued till around 9 am in which all four militants were killed.

‘’The operation is still going on,’’ Jammu and Kashmir DGP K Rajendra Kumar, who was monitoring the situation from Srinagar, told The New Indian Express.

Home Minister Postpones Visits To Russia and US

Indian Home Minister Rajnath Singh postponed his visit to Russia and the US due to the situation in the Kashmir Valley.

The minister tweeted, “Keeping the situation of Jammu and Kashmir in mind and in the wake of terror attack in Uri, I have postponed my visits to Russia and the USA.”

Though infiltration attempts have seen an increase in the last couple of months, security agencies were  perplexed as to how the militants could sneak across the LoC into Uri and then carry out a major terror strike, despite heightened vigil on the LoC following credible inputs of repeated infiltration attempts, sources said

Meanwhile at the 17 th.Non-Aligned Movement’s summit in Venezuela, the Head of the Indian delegation, Vice President Hamid Ansari, asserted that “concrete action” is needed in the fight against terrorism and asked the 120-nation group to set up a mechanism to ensure effective cooperation in combating the menace.

“Terrorism is one of the most egregious sources of human right violations today and its use as an instrument of state policy is to be unequivocally condemned. The time has come for our movement to recognize the need for concrete action in the fight against terrorism”, Ansari told the plenary session.

He stressed the need to establish a “mechanism” within the NAM movement that will ensure effective cooperation in combating terrorism, which is the main threat to security, sovereignty and development.

Ansari’s remarks came against the backdrop of India’s raising its concerns at various international forums over Pakistan’s support to cross-border terrorism.

“We must also ensure that all existing structures that are the building blocks of UN’s Global Counter Terrorism Strategy function in a non-partisan and professional manner,” Ansari said. 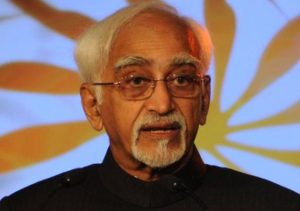 Earlier, during NAM’s Foreign Ministers’ meeting, Minister of State for External Affairs M J Akbar had also called on NAM to set up a “working group on terrorism” to safeguard world peace, stability and prosperity.

“Governments which think they can pay lip service to sanity at a NAM summit, and continue to arm, shelter and exploit terrorists in a war by other means, when they return home will learn that you cannot sip on poison and hope to live,” Akbar had said in an apparent reference to Pakistan.

The  Indian state of Kashmir has been in the grip of deadly unrest for more than two months, with protesting residents clashing almost daily with security forces, in the worst violence to hit the region since 2010.

At least 87 civilians have been killed and thousands injured in the protests against Indian rule, sparked by the killing of a popular Hizbul Mujahideen leader Burhan Wani in a gun battle with soldiers on July 8.

Modi on his mother

Colombo port West Container Terminal expected to be operational in  2024