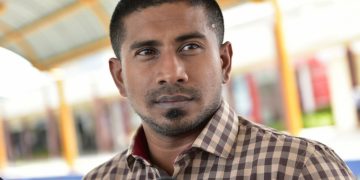 Male, March 31 (newsin.asia): The Maldivian government has slapped a new terrorism charge against  the already jailed opposition MP Ahmed Mahloof on the eve of his remand deadline, in a fresh attack on the political opposition, the Maldivian Democratic Party’s international spokesman Hamid Abdul Ghafoor said on Friday.

Arrested on 22 February under Yameen’s illegal ‘state of emergency’, Mahloof was brought to court on 17 March and remanded for 13 days.

On 29 March, he was brought to court again and served papers for charges of “false reporting” and “obstruction of police duty.” Both charges do not permit the authorities to keep a suspect in remand detention, and so the State also added a charge of terrorism against Mahloof.

“The terrorism charge is designed to ensure Mahloof can be further remanded in jail, and follows a pattern of malicious persecutions by President Yameen against opposition lawmakers,” the MDP International wing spokesman said.

He also gave a list of MPs in detention:

Abdulla Riyaz, deputy leader of the Jumhooree Party, was arrested on March 2 from a peaceful protest and charged 12 days later, with “conspiring to overthrow the government”. Riyaz is also on trial for “influencing official conduct.”

All others who were arrested with MP Abdulla Riyaz were released, in blatant violation of fair and equal application of the law.

Riyaz was brought to court 18 March, for his ongoing trial for “influencing a public official.” He was given 5 days to appoint a lawyer, but produced before court after 3 days. After the hearing concluded, he was again taken back to the Court, and sent to remand until the end of the trial. MP Abdulla Riyaz did not have any legal representation at time of his trial or remand, and his lawyers were not notified. MP Riyaz was then transferred to Maafushi Prison. MP Abdulla Riyaz has also been charged with terrorism.

MP Ahmed Faris Maumoon was arrested on 8 February, from his home. MP Faris is now going through his fourth period of detention since 18 July 2017. During this 250-day period, Faris has only been at liberty for a total of 4 days.

Although Faris was most recently arrested on allegations of bribery of MPs, he was also notified on 8 Feb 2018 that he was suspected of attempting to overthrow the government through violent means or rioting. On 18 March 2018, Faris was informed that he was now under suspicion of terrorism.

On 21 March 2018, Faris was presented before a judge at the Criminal Court and charged with terrorism. At this hearing, the presiding judge determined that Faris be remanded until the end of his trial.

MP Ahmed Mahloof was arrested on 22 February, from outside the MDP campaign office. Mahloof is charged with “obstruction of police duty.” MP Mahloof is kept in solitary confinement, in a cell with no ventilation, or fan, and forced to sleep on the floor. On 17 March, Mahloof was brought to court, and remanded for 13 days. His remand was extended although his investigation was concluded on 27 February. On 29th March, he was charged with terrorism.

Mahloof had previously been sentenced in July 2016, and served a 10- month jail term. MP Ahmed Mahloof has been systematically harassed, and arrested on innumerous times by President Yameen, for his outspokenness on the regime’s mass corruption.

MP Ilham Ahmed was arrested on 12 February. Ilham reported to the police three days after the police launched a search for him, holding his wife as hostage. On 17 March, Ilham was given 15 days in remand, but did not have legal representation at time of remand hearing. He is accused of “attempting to overthrow the Government” and “terrorism”, among other allegations.

He was later on brought to court on 21 March and the judge decided to hold him in remand till the end of his trial. He has been transferred to Maafushi Prison.

MP Abdulla Sinan was arrested on 9 February. On 17 March, Sinan was given 15 days in remand, and did not have legal representation at time of remand hearing.

Sinan is charged with “bribery”, “deterring a witness from testifying or other person from performing a public duty”, “terrorism”, and “attempting to overthrow the government.”

MPs Ilham and Sinan are amongst the 12 MPs that the Supreme Court ordered to be reinstated in its 1 February ruling. However, they still remain disqualified.

The MPs named above were arrested under the illegal ‘state of emergency, Ghafoor said..

The same two judges oversaw all the cases involving the MPs, and they refused to apply the Privileges and Immunities of Parliamentarians Act, even though the Act was not suspended under the State of Emergency. According to the Act, in order to arrest an MP, the Prosecutor General is required to appear before court to seek the arrest warrant on the request of the police.

The opposition spokesman further charged that the jailed MPs are also being subjected to cruel, degrading and inhumane treatment in detention, defying the Maldives Anti-Torture Act and international law. They are kept in solitary confinement, their cells lack ventilation or cooling, they are routinely denied sufficient medical care, and clean drinking water. They are denied full legal rights, and in the case of MP Faris Maumoon, has been subjected to undue force by prison guards, resulting in injury.

This pattern suggests that President Yameen is using degrading treatment as a tool to coerce and intimidate MPs.

In a statement released after visiting the Maldives from 19-21 March, the Inter Parliamentary Union expressed “serious concerns about the scale of human rights violations of parliamentarians in the country.”

The IPU also called the unconstitutional removal of the dozen lawmakers “arbitrary” and demanded their immediate reinstatement. The IPU called for “respect for fair trial guarantees of all the MPs” and expressed concern about other MPs who are at liberty but are facing charges, Ghafoor pointed out.

“The charges against the MPs are part of a deliberate policy by President Yameen to destroy the political opposition, and especially the opposition’s majority in Parliament. President Yameen has shown, time and again, his utter disregard for the Maldivian constitution and international law.

The Joint Opposition demands the immediate release of their Members of Parliament, and other political prisoners, and urges the international community to impress upon President Yameen the need to return to rule of law and cease his malicious persecution of the opposition.

(The featured image at the top is that of Maldivian opposition MP, Ahmed Mahloof)