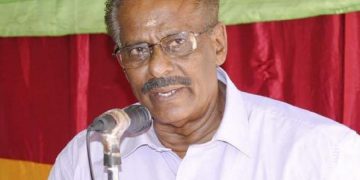 On September 12, senior Tamil National Alliance (TNA) leader and MP Mavai Senathirajah’s meeting in Paris was disturbed by a gang of five who released a toxic gas to disperse the audience after heckling him.

On September 4 this year, the Sri Lankan High Commissioner in Malaysia, Ibrahim Sahib Ansar, was mercilessly thrashed at the Kuala Lumpur International Airport by a gang of five Indian origin Tamils owing allegiance to the pro-LTTE Tamil Nadu leader Sebastian Seeman. Ansar, who was wounded in the head, had to be rushed to hospital

In 2015, Tamil National Alliance (TNA) MP, M.A.Sumanthiran, was surrounded, confined and badly heckled by a group of extremists at a meeting in Sydney in Australia.The threatening tone and gestures of the gang of youngsters prevented the audience from rescuing Sumanthiran.

A moderate TNA MP told NIA that after failing to get some extremists elected in the July 2015 Sri Lankan parliamentary elections (a performance which was by any yardstick pathetic) their followers in the Diaspora have been activated.

“What they cannot do in Sri Lanka, for want of public support, they are doing abroad,” the MP said.

“Extremists are unable to get people to come to their meetings in any significant numbers in the Tamil areas of Sri Lanka. This is a disincentive for organizing demonstrations here,” the moderate leader said.

The Sri Lankan police too do not hesitate to take action in case of violence. This acts as a deterrent.

And since, extremists are not a draw among the Tamils in Sri Lanka, pro-LTTE Diaspora groups and Indian Tamil groups aligned to them, are active abroad. But here too, they can only get attention by indulging in violence.

Mano Ganeshan, Sri Lankan Minister of National Dialogue and a doughty fighter for the Tamil cause in a democratic way, said that extremists have no significant traction in the Diaspora either.

“During President Mahinda Rajapaksa’s time, thousands of Tamils used to come out on the streets of European cities to demonstrate on the condition of the Tamils in Sri Lanka after Eelam War IV.But after the change of regime in 2015, the extremists are unable to get even 50 people for their meetings,” Ganeshan said.

But he would not attach much political importance to the recent incidents of violence against Sri Lankan personalities.

“I would consider these incidents to be sporadic – of the kind extremist groups indulge in all societies. They do not reflect the general or popular trend in thinking,” Ganeshan said.

Full Use of New Media

Extremists are no longer dependent on the mainstream media to publicize or justify their actions. The social media is their preferred tool, as its reach is widening by the day and it is also entirely free of control.

The social media is being used widely to publicize the “heroics” of the extremists, even though they may be utterly lacking in substance, political importance or general acceptance.

When TNA MP Sumanthiran was confined and heckled, an YouTube video on it went viral. Likewise, the Kuala Lumpur airport CCTV footage of the attack on Sri Lankan High Commissioner Ansar was in the social media domain even before the envoy was shown the clipping by the police for the purpose of identification.

The suspicion is that a collaborator in the airport or the police had promptly handed over the footage to the extremist group which attacked the envoy, so that it could show its “heroics” to the Tamils the world over.

The police in these countries have been very inactive and unresponsive to requests for protection. In the case of envoy Ansar, despite his repeated pleas for protection even on the day of the attack and at the airport, no protection was given. All the seven identified attackers are roaming about freely. Even the two who were arrested are on bail.

In the case of the Paris attack too, protection was sought. The police arrived before the meeting started, searched for explosives and left, when the apprehension of the organizers was that gangs might disturb the meeting. The leader of the attackers had in fact warned of an attack through the social media, a TNA MP pointed out.