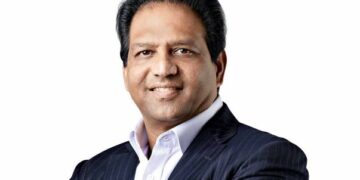 T10 format is ideal for the Olympics: Shaji Ul Mulk

T10 format is ideal for the Olympics: Shaji Ul Mulk

by Editor
in Around The World, Cricket, Pakistan, Recommend
Reading Time: 4 mins read
3 0 Islamabad, February 19 (newsin.asia): The founder of the T10 Cricket League Shaji Ul Mulk has said that the T10 format is best suited for the Olympics and its case for inclusion in the games must be pursued vigorously.

The T10 League is a ten-over format cricket league in the United Arab Emirates (UAE) launched and owned by T Ten Sports Management. The league is approved by the Emirates Cricket Board.

Matches are 10-over-a-side and the duration of each match is 90 minutes. The tournament is a round robin followed by Eliminators and the Final. The league was founded by Shaji Ul Mulk, the chairman of T10 League. The International Cricket Council (ICC) officially sanctioned the league.

“Names of Shahid Afridi and Sanath Jayasuriya still echo in cricketing circles for the brand of the sport they introduced. Gradually cricket has adopted that style of play in the form of T20s. However, the evolution of cricket does not stop at T20s. T10s is yet another addition to cricket,” Shaji Ul Mulk said.

“It took sometime before the T20s were embraced by world cricket. Today, it is arguably the most entertaining and exciting format among the masses. One of the many reasons for the Indian Premier League’s massive success was that it took a head start, even though it emerged as an alternate to rebel Indian Cricket League,” he added.

“With many international cricketers already involved in T10s, it is high time Pakistan owned the format and brought it to Pakistan before it is a bit too late,” he urged.

“This will help get more and more international cricketers in Pakistan and potentially bring more investment in cricket.  More local cricketers will have a chance to showcase their abilities in addition to handsome earnings. It might also help in the prevention of losing talents like Sami Aslam to other cricket leagues. Moreover, this 90-minute format can attract a more international audience, leading to the promotion not only cricket but also Pakistan. It is high time Pakistan adopted this format before someone else did.”

Nawab Shaji Ul Mulk hails from the aristocratic family of Nawabs of Kurnool and is the founder and chairman of Mulk Holdings, a global business powerhouse with diversified interests in the manufacture of building facades, facade contracting, healthcare, plastics and sports assets. The company employs a workforce of more than 7,000 globally and has operations and manufacturing bases in the US, Europe, India, the UAE, Oman and Ghana.

He chairs the Mulk Foundation, the active CSR wing of the group, and is responsible for various philanthropic initiatives in UAE and India, offering free medical clinics, free libraries, support for disabled children and an orphan marriages programme.

The flagship product of the group is the manufacture and distribution of the A2 fire-rated aluminium composite panel under the brand name of Alubond A2. The brand has grown into the world’s largest aluminium composite panel manufacturer with an installed capacity of 25m sqm and installations in more than 100 countries. Mulk Holdings is ranked eighth among the Most Admired Companies in GCC index and in the top 10 best employers of GCC.

An avid cricket enthusiast, he is the only Indian member of the Emirates Cricket Board, headed by HH Sheikh Nahyan bin Mubarak Al Nahyan. The latest passion of Shaji Ul Mulk is the T10 cricket league, which has created history and become a global phenomenon.

Mr Mulk was honoured to be invited by the crown prince of Abu Dhabi HH Mohammed bin Zayed Al Nahyan to be a part of a delegation of UAE businessmen to accompany His Royal Highness during his visit to India.

Family comes first to Shaji and he is vocal about the harmony and peace it brings him. His wife Farha Mulk and son Adnan Ul Mulk, with fiancée Noorie, and daughter Nida Mulk and son-in-law Bilal Khan with grandchildren Hazza and Hassan and youngest daughter Sania Mulk, are his biggest treasures.