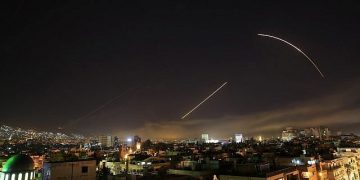 The airstrikes carried out by the US, UK and France on alleged chemical weapons facilities in Syria on April 14, are yet another instance of how the US (and its allies) use “false flags” or “fake news” to unleash military action to serve their geo-strategic interests, writes P.K.Bala.chandran in DailyFT.

The US has been saying that Syrian President Bashar al- Assad is an “animal” who kills and maims his own people using chemical weapons like nerve gas. But the real reason for hating Assad is not that he has been using nerve gas against his own people,  but that he has chosen to act independently, often joining forces with the enemies of the US in the region, including  Iran and Russia.

US-Syria relations worsened from 2003 onwards. Issues of U.S. concern included the Syrian Government’s failure to prevent Syria from becoming a major transit point for foreign fighters entering Iraq; its refusal to deport from Syria former Saddam Hussein regime elements supporting the insurgency in Iraq; its interference in Lebanese affairs, its protection of the leadership of Palestinian rejectionist groups in Damascus; its human rights record, and its alleged pursuit of “weapons of mass destruction.”

The 2011 “Arab Spring” mass movement affected the regime in Syria too. Assad, like other rulers in the region, saw it as a Western-inspired conspiracy. As contradictions with the West sharpened, Russia under Putin, wanting to be a factor in Middle Eastern politics again, jumped into the fray and offered Assad a helping hand.

Western governments used their national media to the hilt to portray Assad as a ruthless and bloodthirsty dictator who relished watching TV images of kids being killed by poison gas.

In fact, according to the Russians, the US used the April 14 air strikes to destroy evidence which might show that America’s charge about the use of chemical weapons is false. The attacks took place just before a team from the Organization for the Prohibition of Chemical Weapons (OPCW) was to visit Douma, the site which was allegedly subjected to chemical attacks.

Robert Fisk of The Independent went to Douma where he was told by a local doctor that people died not because of gas but due to lack of oxygen in their bunkers. During bombings, gusts of wind threw mounds of dust into bunkers which chocked those who were taking shelter there.

“There are many people I talked to amid the ruins of the town who said they had never believed in gas stories, which were usually put about, they claimed, by the armed Islamist groups,” Fisk wrote.

Peter Ford, the former British Ambassador to Syria, told BBC Radio Scotland that “in all probability” the alleged chemical attack never happened and that the video and image evidence used as proof by the US and its allies was falsified

Past Use of Fake News

Writing in Russia Today Irish journalist Danielle Ryan says that ‘false flag’ or fake news” has been used many times before by the US to start military operations.

In October 1990, the testimony a 15-year-old Kuwaiti girl, Nayirah, before the US Congress, was used to sell the first Gulf War to the American people.  An emotional Nayirah told the Congressional Human Rights Caucus that she had witnessed Iraqi soldiers taking babies out of incubators and leaving them on the floor to die.

But what the American public did not know was that Nayirah was the daughter of the Kuwaiti ambassador to the US and she had been coached by the American PR firm Hill and Knowlton.

Ryan recalls that in the 1960s, American military leaders devised plans to bomb US cities and blame Cuban leader Fidel Castro for them, in order to manufacture public and international support for a war against Cuba.

“The plan was codenamed Operation Northwoods. The American military suggested sinking boatloads of Cuban refugees, hijacking planes and bombing Miami. The goal was to convince Americans that Castro had unleashed a reign of terror upon them.”

“The top brass were even willing to cause US military casualties by blowing up an American boat in Guantanamo Bay and blaming Cuba. Why? Because, as they put it: casualty lists in US newspapers would cause a helpful wave of national indignation and help manufacture support for war,” Ryan writes.

“The plans were quashed by President Kennedy, who was assassinated one year later, leading some to speculate on a link between those events, the writer speculates.’

On August 2, 1964, North Vietnamese torpedo boats attacked the USS ‘Maddox’ while it was on “routine patrol” in international waters in the Gulf of Tonkin. Two days later, the US Navy reported a second “unprovoked” attack on the ‘Maddox’ and the USS ‘Turner Joy’.

Ryan says that the second attack was “fake”. But it led to the unleashing of a war in Vietnam which proved to be the most disastrous in American history.

But John Nixon, the CIA agent who interrogated Saddam in 2003, came to the conclusion that there weren’t any such weapons.

But America wanted to overthrow Saddam anyhow, and cooked up the story of the WMD without intelligence confirmation, Nixon told The Independent.

Ryan refers to a recently declassified three-page memo written by members of the National Security Council suggesting that the US government should acquire Soviet aircraft which would be used to stage attacks and provide the pretext for war.

Such aircraft, the memo said, “could be used in a provocation operation in which Soviet aircraft would appear to attack US or friendly installations to provide an excuse for US intervention.”

By all independent accounts, last Saturday’s airstrikes against Syria have failed to deliver the goods. It is not clear as to what they destroyed. Russian reports have been contradictory. One report said that chemical warfare facilities were evacuated to safer places elsewhere days ahead of the raid. But the official Russian and Syrian stand is that there were no chemical facilities in the first place.

At any rate, the attacks have made no difference to the ground situation in Syria. They have, on the other hand, provoked the allies of the US in Europe to call for a political solution eschewing war.

Europe is concerned that more than 465,000 Syrians have been killed, over a million injured, and over 12 million ( half the country’s prewar population)  have been displaced because  of the eight year war.

US policy on Syria is confused. President Donald Trump, for all his bluff and bluster, is in two minds about keeping US troops in Syria. On the one hand, Washington is fighting some of the Islamist terror groups ranged against the Syrian government headed by Assad. But on the other hand, it is also hell bent on overthrowing Assad and is using some Islamic groups for this purpose.

However, for all its efforts, the US has been unable to make a material change in the situation in Syria. Assad is well entrenched and is pushing back the Islamist rebels. And his ally, Russia, continues to have a firm footing in the country. American pressure has only been driving Syria into the arms of Russia.