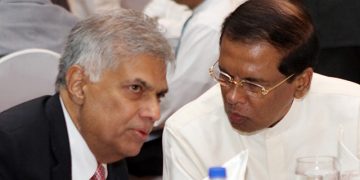 Colombo, February 13 (newsin.asia): The two main members of the ruling coalition in Sri Lanka, the Sri Lanka Freedom Party (SLFP) led by President Maithripala Sirisena, and the United National Party (UNP) led by Prime Minister Ranil Wickremesinghe, have  decided to form a committee to go into the question of running the government in the light of their crushing defeat in the February 10 local bodies elections.

At two meetings with President Sirisena on Tuesday, the SLFP and UNP-led fronts decided  that the committee should submit is  report within three days, whereupon the top leaders will take a final decision on whether the coalition should continue or not or how to run the government.

Both the SLFP and the UNP were beaten comprehensively by the new outfit, the Sri Lanka Podujana Peramuna (SLPP), a breakaway group from the SLFP led by former Sri Lankan President Mahinda Rajapaksa.

The meteoric rise of the SLPP like colossus resulted in mutual mudslinging in the ruling coalition.  The blame game that was unleashed seriously threatened the coalition known as the “National Unity Government.”

For the defeat, the SLFP blamed the UNP’s economic and foreign policies, including the infamous LKR 11.4 billion Central Bank bond scam in which Wickremesinghe was supposedly   involved albeit indirectly.

The UNP  blamed the President’s reactionary and conservative thinking for the debacle because he would overturn many decisions taken by the neo-liberal and pro-West UNP.

Many members and MPs of the SLFP wanted to quit the coalition and join forces with the SLPP led by the popular former President Mahinda Rajapaksa. Others, including the President,   wanted the coalition to continue because this group is completely against having any truck with Rajapaksa their arch rival.

The UNP, on the other hand, wanted to continue with the coalition until the end of the term of the current parliament in August 2020. The UNP is the single largest party in parliament with 106 MPs. With so many MPs, the UNP was not in favor of going for early elections and upsetting the applecart.

But irked by the pro-Rajapaksa goup’s anti-UNP tirade and threats to join up with the detested and feared Rajapaksa to form an SLFP-SLPP government, the UNP declared that it would form a government on its own with its 106 members plus seven defectors from the SLFP to get a simple majority.

Caught between the two antagonistic forces, President Sirisena proposed that the controversial Wickremesinghe steps down in favor of the non-controversial parliament Speaker Karu Jayasuriya, who is also a UNP member.

But when Jayasuriya’s name was proposed, there was a loud chorus of protest from the UNP which felt that a weak Jayasuriya would be dominated by the President. The UNP insisted that Wickremesinghe should continue to be Prime Minister and if he is not appointed,  they would form a UNP-led government.

However, at the evening meeting with the President, tempers cooled and it was decided to form a committee to thrash out all issues in three days to help the top leadership of the two parties take the final decision collectively.