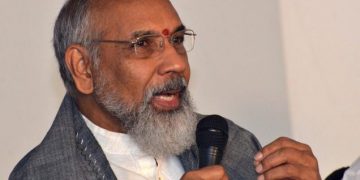 Colombo, October 6 (The New Indian Express): Sri Lanka’s  Northern Provincial Council (NPC) on Thursday passed a resolution  seeking an investigation into  Chief Minister C.V.Wigneswaran’s charge that he has been continually receiving information about a plot to assassinate him and put the blame on the Liberation Tigers of Tamil Eelam (LTTE).

“The resolution asked the Inspector General of Police to investigate the complaint and, if necessary, increase security for the Chief Minister,” the Chairman of the NPC, C.V.K.Sivagnanam , told Express.

On Tuesday,  the Secretary  General of the Tamil National Alliance (TNA) Mavai Senathirajah had said that he had asked TNA chief, R.Sampanthan, to discuss the matter with Sri Lankan President Maithripala Sirisena,  and seek enhanced police protection for Wigneswaran.

Senathirajah told the media that Wigneswaran, having been a Supreme Court judge before entering politics in 2013, would not have made a charge of such seriousness in writing, without grounds.

Wigneswaran had made the charge on October 1, in a written speech which was read out at the release of a book written by Prof.Thirunavukkarasu on Sri Lankan constitutional history from the Donoughmore constitution in the 1930s to the one being drafted by incumbent President Sirisena.

In the written speech, which was carried by all Tamil newspapers on October 2, Wigneswaran said that the Tamils were cheated in the past and are being cheated now too, by the powers-that-be in South Sri Lanka. But if he expresses these grievances, he is misinterpreted and accused of being a communalist and extremist ,he said. He then went on to mention a threat to his life from Sinhalese-majority South Sri Lanka.

However, on October 2, when Wigneswaran attended a national sports event in Jaffna along with President Mihripala Sirisena, he did not mention any threat to his life in his speech. He wailed about his being misinterpreted by the Sinhalese without first getting his speeches correctly translated from the Tamil original. He spoke in Sinhalese also so that the President and other ministers and officials from South Sri Lanka could follow him.

Some political observers wondered why he did not mention the alleged threat to his life in the presence of the President.

Moderate Tamils feared that such statements might needlessly exacerbate ethnic tensions in Sri Lanka. But were relieved to find both North and South Sri Lankans taking Wigneswaran’s allegation in the stride.