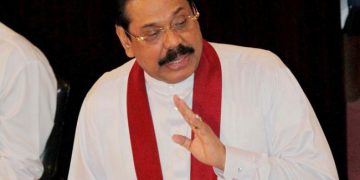 Colombo, Dec 14 (newsin.asia) – Sri Lanka’s challenged Prime Minister, Mahinda Rajapaksa will step down from his premiership on Saturday after the Supreme Court earlier Friday continued a suspension order on him and his cabinet from continuing in office.

Rajapaksa’s son and Parliamentarian from the Sri Lanka Podujana Peramuna, Namal Rajapaksa said that his father will be stepping down from his post to ensure the stability of the nation.

“Former President Rajapaksa has decided to resign from the Premiership tomorrow after an address to the nation. The SLPP with the former president, the Sri Lanka Freedom Party and others  will now work to form a broader political coalition with President Maithripala Sirisena,” Namal said in a statement.

SLPP members said Rajapaksa is scheduled to address the nation on Saturday morning.

The Supreme Court, earlier Friday ordered to continue the temporary suspension on Rajapaksa and his government till the case is further heard on January 15, 16 and 17.

The Supreme Court issued the order after hearing the petition filed by Rajapaksa who sought the Supreme Court’s verdict after the Court of Appeal, on Dec 3, issued a temporary stay order on the government.

The stay order was issued after 122 lawmakers filed a petition saying the government had been defeated in two no confidence motions in Parliament and they could no longer continue to function as ministers.

Political analysts said that Rajapaksa’s resignation on Saturday is also likely to end a nearly two month political crisis which erupted after President Sirisena, on Oct 26 sacked his cabinet and Prime Minister Ranil Wickremesinghe and appointed Rajapaksa to the post.