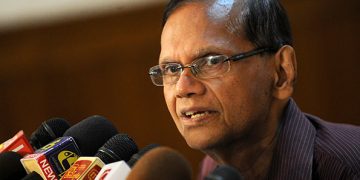 Colombo, Feb 14 (newsin.asia) – Sri Lanka’s Podujana Peramuna, led by former President Mahinda Rajapakse, on Wednesday called on the government to immediately establish a Commission of Inquiry into the Aluthgama riots in which at least eight Muslims were killed following clashes with radical Buddhist nationals.

In a statement, Chairman of the party, Professor G.L. Peiris said the government must probe the incidents that led up to the violent clashes which occurred during the tenure of Rajapakse himself in 2014, the sudden flare up of extremist activity in 2017 and the Gintota clashes between Muslims and Buddhists in November last year.

Peiris said the full severity of the law should be brought to bear on such incidents in the future.

Peiris also said following the Sri Lanka Podujana Peramuna’s resounding victory at the recently concluded local government elections, a rumor began circulating in the social media that the radical BoduBalaSena group had made
facebook posts in support of the SLPP.

“Then articles appeared in the newspapers quoting a letter written to the press by Mr. N.M.Ameen of the Muslim Council stating that SLPP cadres had allegedly harassed several Muslim individuals in Ugurassapitiya in Kandy and Veyangalla in Agalawatte for not supporting the SLPP. If any such incidents had occurred, they should be
reported to the police and dealt with,” Peiris said.

“The public is well aware of the strategies that were orchestrated before the last presidential election to alienate the Muslim community from our leadership. The book written by prominent Jathika Hela Urumaya activist Asoka Abeygunawardene titled ‘Yuga Peraliya’ the first copy of which was formally presented to President Maithripala Sirisenaon 23 March 2015 has explained the strategies adopted to send the Muslim community en masse onto the other side before the last presidential election.”

Audio clips of the main conspirators discussing these strategies over the phonewere subsequently circulated in the social media. We admit that our government was not decisive enough in dealing with this conspiracy.
Everyone will remember that as the yahapalana government rapidly declined in popularity in 2017, there was yet another spate of attacks on Muslim businesses and houses. Then a monk at the centre of these incidents was granted bail three times in a single day and everything was swept under the carpet, Peiris said.

“The Muslim community has now realized the deception that has been practiced on them, and the results of the local government election clearly reflects that. It is therefore not surprising that conspiratorial elements are once again at work. The public should be vigilant and not be misled a second time. The government should immediately establish a Commission of Inquiry into the Aluthgama incident, the incidents that led up to it, the sudden flare up of extremist
activity in 2017 and the Gintota incident. In the meantime, the full severity of the law should be brought to bear on such incidents in the future.”