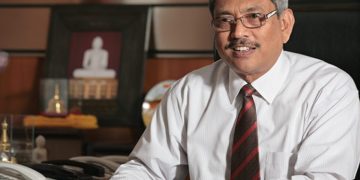 The Commission to Investigate Allegation of Bribery or Corruption filed action against Rajapaksa and seven others for allowing private Avant Garde Maritime Services to operate the armory and provide sea marshal services.

Director General of the Commission Dilrukshi Dias Wickremesinghe said that Avant Garde Maritime Services had earned a sum of Rs 11.4 billion as a result of being allowed to maintain a floating armory.

The head of Avant Garde, retired major Nissanka Senadhipathi is also being charged under tough bribery and corruption laws.

The case of the floating armoury had surfaced after the Sri Lankan Navy boarded the vessel on October 6, last year to discover a massive stash of weapons on board.

There have been allegations that the Avant Garde Maritime Services was unduly favoured by the previous government of Mahinda Rajapaksa and as a result caused losses to the Sri Lankan Navy.
SendShareTweetShareShare