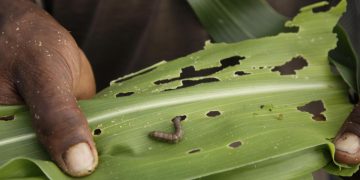 Share on WhatsApp
Colombo, Jan 23 (newsin.asia) – Sri Lankan President Maithripala Sirisena, on Wednesday instructed authorities to implement an urgent national program to control the ‘Fall Armyworm’ which had destroyed thousands of agricultural crops maize and basic vegetables across the island country.
In an urgent discussion held with agriculturists and relevant authorities, President Sirisena instructed them to jointly implement a program to spray pesticide with the assistance of the public as well as the private sector and launch a national program which should be completed within a time frame.
A Presidential Task Force has already been set up to implement urgent action while the cabinet of ministers have also agreed to allocate Rs.250 million as compensation for the destroyed crops.
The Fall Armyworm has infected close to 50 percent of maize cultivation in the country, extending to 82,000 hectares, Department of Agriculture Director General Dr. W. Weerakoon told the local Daily FT.
The total estimated damage of the crop is about 20 percent, he added but agriculturists say the devastation may be more and thousands of farmers had been affected by the threat.
Dr. Weerakoon said that with an ability to float as far as 100 kilometers on wind currents per night, it is believed that the Fall Armyworm may have reached Sri Lanka from India, which suffered an infestation in March last year.
The government has sought assistance from the UN’s Food and Agriculture Organization (FAO), to bring down experts to help the Agriculture Department mitigate the threat.
The government has also sought assistance from the International Center for Maize and Wheat Improvement (CIMMYT) to help them with the situation.
An agriculturist, wishing to be unnamed, from central Sri Lanka said that the Fall Armyworm had turned into an epidemic in Sri Lanka and if swift measures were not taken, it could have a severe negative impact on the
Sri Lankan economy and lead to a food shortage.
According to the UN’s FAO, Fall Armyworm is an insect that is native to tropical and subtropical regions of the Americas.
The worm prefers maize, but can feed on more than 80 additional species of crops, including rice, sugarcane, vegetable crops and cotton.
Fall Armyworm was first detected in Central and Western Africa in early 2016 and in July 2018 it was confirmed in India, threatening to spread to other South Asian countries.
SendShare2Tweet1ShareShare