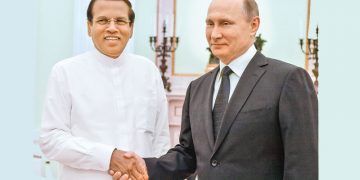 Sirisena, said that a thorough probe was already underway against the company which had exported the consignment of tea from Sri Lanka in which the beetle was found, and if thecompany is at fault, then action would be taken against them.
Sirisena also said that a special delegation headed by Plantation Industries Minister Navin Dissanayake and Industry and Commerce Minister Rishad Bathiudeen will leave for Russia to discuss the issue.
Sirisena further said that he was confident that Russia, who was a long standing friend of Sri Lanka would respond positively to the request to lift the temporary ban on tea exports.
According to international media reports, the Russian agricultural safety watchdog Rosselkhoznadzor, placed temporary restrictions on imports of all agricultural products from Sri Lanka, including tea, from Dec. 18, after it found an insect, known as the Khapra beetle, in the packaging of one consignment of tea from Sri Lanka.
Russia was the second largest tea market for Sri Lanka in 2016 after Iran. Russia imported US$ 143 million worth of Ceylon Tea, which was 11.3 percent of Sri Lanka’s tea exports, last year.
(Pic courtesy Daily News)
SendShare2Tweet1ShareShare