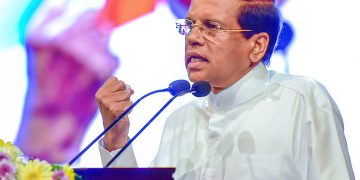 Share on WhatsApp
Colombo, Jan 17 (newsin.asia) – Sri Lankan President Maithripala Sirisena, on Thursday appointed a special presidential commission to probe fraud and corruption which allegedly took place in the unity government between Jan. 2015 and Dec. 2018 in the island country, the President’s Media Division said in a statement Thursday.
Sirisena appointed a five member committee led by Retired Supreme Court Judge A.H.M. Upali Abeyrathne.
The special commission will probe into fraud and malpractices committed when the government came into power in 2015.
Sirisena recently said that he was certain there will be frauds of serious nature that will surface once the commission begins its probe.
SendShare1TweetShareShare