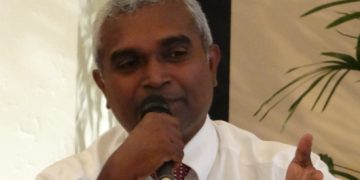 Colombo, September 20 (NIA): Dr.Tilak Siyambalapitiya, former Chief Engineer (Generation Planning) in the Ceylon Electricity board (CEB), has warned that Sri Lankans will have to face load shedding in 2018 and put up with high cost power thereafter, if the government persists in rejecting cheaper coal-fired power plants, and going for the much more expensive diesel, LNG, Solar and Wind powered plants.

Writing in The Island daily on Monday, a day after the Public Utilities Commission (PUC) ratified the government’s power generation plan for 2015-2034, Siyambalapitiya points out that while the Norochcholai coal fired plant produces power at LKR 5.3 per unit, the diesel and solar powered plants will be generating at LKR 22 per unit.

Actually, according to the PUC, thermal power plants other than those based on coal, will be generating at LKR 33 per unit. The other renewable sources of energy will be able to generate only at LKR 22 per unit. The coal fired plants, on the other hand, will continue to be the cheapest with power being generated at a cost of LKR 5.8, only a few cents more than the current cost.

But the government cannot transfer the additional cost to the consumer as it has a political commitment to supply power to the masses at LKR 2.50 per unit. The price of power is fixed by the state in Sri Lanka to suit the pockets of the masses.

Aware of the fact that there will be a power shortage from 2018 onwards, if drastic steps are not taken immediately, the PUC has approved the government’s plan to generate 4955 MW by 2020, a hike of 25 percent from the present capacity of 3900 MW.

But in this scheme, there will be only two coal-fired plants with a capacity of 170 MW. The rest will be accounted for by Diesel, LNG, Wind and Solar-based plants.

The Joint Venture with India to build a 500 MW coal-fired plant in Sampur has been shelved. India may be forced to shift LNG at Sampur or give up altogether as it has serious reservations about Sri Lanka’s switching over to LNG in the present state of its development.

But LNG and wind and solar power plants cannot be set up overnight to satisfy the humongous demand in 2018, Siyambalapitiya points out, and warns that power cuts and load shedding will become unavoidable.

Sri Lanka needs more such large scale and cheap coal fired plants because the demand for power is growing at the rate of 9 to 10 per cent per year, Siyambalapitiya says.

Neighboring India rests heavily on coal even though it is building more and more LNG based plants also. India has so far set up LNG-based plants to generate a total of 1000 MW. But this is minuscule compared to the 150,000 MW generated by the coal fired plants there, Siyambalapitiya points out.

Sri Lanka had bad power cuts in 1983, 1987,1992, 1996, 200 and 2001. But it was the first coal-fired power plant at  Norochcholai built with Chinese help, which put an end to power cuts and brought down the cost of power drastically. Now there is a danger of Sri Lanka’s reviving the era of power cuts and re-joining the “loading shedding club”, Siyambalapitiya laments.