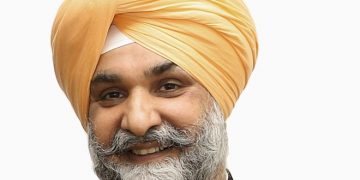 Colombo,January 26 (newsin.asia): The Indian High Commissioner in Sri Lanka, Taranjit Singh Sandhu, on Friday said that Sri Lanka has a “special place” in the hearts of Indians and congratulated the Government of Sri Lanka on the completion of three years in office. He  was speaking at a largely attended function at India House here, to mark India’s Republic Day.

It was on January 26, 1950, that India adopted a republican constitution and ceased to be a British Dominion. And it was on January 9, 2015, that a new government was established in Sri Lanka with Maithripala Sirisena as President and Ranil Wickremesinghe as Prime Minister following Sirisena’s victory in the January 8, 2015  Sri Lankan Presidential election.

High Commissioner Sandhu recalled the exceptionally high level bilateral visits, including the landmark visit of Indian Prime Minister Narendra Modi to Sri Lanka in May 2017 and  enumerated the many landmarks in bilateral relations witnessed over the last year.

These include: the expansion of India-assisted 1990 Emergency Ambulance Service nationwide; completion of nearly 46,000 houses in the war-affected Northern and Eastern provinces and the ongoing construction of 14,000 houses in the plantation areas of Central Sri Lanka; a fresh assistance of US$ 318 million for the development of Sri Lanka’s Railways; and the allotment of US$ 45 million for the renovation of th Kankesanturai harbor in Jaffna.

The High Commissioner added that India’s total development assistance to Sri Lanka stands at US$ 2.76 billion, with over US$545 million as outright grants.

The High Commissioner and his officials paid homage to the fallen soldiers of the Indian Peace Keeping Force (IPKF) at a solemn ceremony at the IPKF memorial in Batttaramulla in the outskirts of Colombo.

Sri Lankan President Maithripala Sirisena, Speaker Karu Jayasuriya, former President Chandrika Bandaranaike Kumaratunga, a number of Ministers, Members of Parliament, senior officials and diplomats were among the dignitaries who participated in the event.

The Consulates General of India in Jaffna and Hambantota and the Assistant High Commission of India in Kandy also celebrated the 69 th.,Republic Day by hoisting the Indian national flag on Friday.