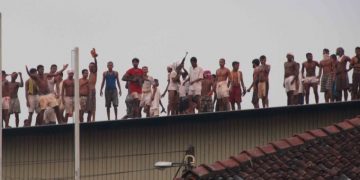 Prisons Commissioner Emil Lamahewage was arrested in connection with the November 2012 bloodbath at the Welikada high security prison in Colombo, police said.

A police inspector was arrested on Wednesday for involvement in the killings at Welikada which happened when Lamahewage was the prison superintendent.

The arrests followed a reopening of the case in July last year following media reports that the killings were ordered by senior members of the former regime.

Trouble erupted inside the prison when police conducted a sweep for drugs and allegedly faced off with inmates trying to grab their weapons.

Armed troops called in to restore order opened fire killing 27 prisoners. Witnesses have said they were killed execution-style after calling them out by name.

The killings escalated international condemnation of Rajapakse, whose regime had sanctions imposed for rights abuses in the final years of Sri Lanka’s 37-year-long ethnic war that ended in 2009.

Some of the inmates killed were being held in custody over robberies at Sri Lanka’s national museum and a temple, crimes allegedly linked to senior members of Rajapakse’s regime.

The 2012 massacre was the worst prison violence since 50 inmates were hacked to death in a July 1983 riot.

Rajapakse lost a 2015 election to Maithripala Sirisena who made a promise to restore rule of law and ensure accountability for past abuses.