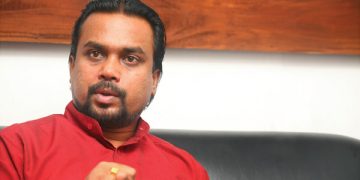 Colombo, Oct 26 (NIA) – Sri Lanka’s ‘Joint Opposition’, on Wednesday, said that the island nation was going back into its dark ages with the rise of a new sword gang group in the former war torn north.

Opposition parliamentarian, Wimal Weerawansa told parliament that while former President Mahinda Rajapakse had eliminated terrorism, the present government had failed to prevent the rise of the ‘AAVA group’ which now posed as a threat to the north.

“Mahinda Rajapakse successfully ended terrorism and also bought down the cost of living. We now have a new group rising in the north. The government has not been able to prevent this,” Weerawansa said.

He further blamed the government for imposing high taxes on the public, on the pretext of facing high debts caused by the previous regime.

“When Mahinda Rajapakse took over as President in 2005, he did not burden the public although the country was facing a war at the time. This government has been unable to fulfill any of its promises in the past 21 months and is instead imposing a heavy VAT on the public,” he said.

Many opposition parliamentarians, on Wednesday, protested against the government’s decision to increase VAT  on certain essential items.

Opposition parliamentarians also questioned the security in the north which had been disrupted recently following the death of two Jaffna University students.

Sri Lanka’s Law and Order Minister, Sagala Ratnayaka told parliament on Tuesday, that the Police had launched an operation to look for members of the ‘Aava’ sword gang in the North.

He said that the shooting incident in Jaffna recently, where the two Jaffna university students were killed, involved police officers who were looking for ‘Aava’ sword gang members.

He also said that a comprehensive investigation was launched into the death of the two youth and that forensic expertise had been sought.