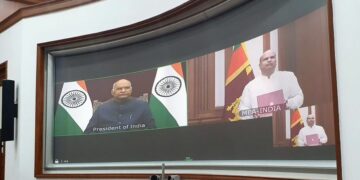 Asoka Milinda Moragoda was born on 4 June 1964. His career has spanned business, government, politics, diplomacy, media and academia. He presently serves as the founder of several investment companies and private-equity firms and provides leadership to many non-profit foundations.

Until recently he served in the Cabinet as Minister of Justice and Law Reform. During his 9-year tenure in Parliament, at various periods he also held the posts of Minister of Tourism, Minister of Economic Reform, Science and Technology and Deputy Minister of Policy Implementation. Milinda was responsible for carrying out progressive reforms in these areas under his oversight.

Milinda was educated in Sri Lanka, Europe and the United States. He is a graduate of the Master of Business Administration (MBA) Programme of the Institute for Management Development (IMD) in Switzerland. From 1994 to 1995 he was a Fellow of the Centre for International Affairs at Harvard University.

Before entering politics, Milinda was the Founder Chairman of Mercantile Merchant Bank Ltd. (MMBL), a privately held investment-banking and private-equity group which is a joint US-Sri Lankan venture. The group has investments in a wide range of business sectors, including financial services, business logistics, information technology, trading and distribution, property development, petroleum-related services, quality assurance services and the hospitality sector. MMBL has strategic alliances with a number of multinational companies, including Indian companies, as well as Fortune 500 international brands and high net-worth investors. Milinda was also involved with the creation of the Colombo Stock Exchange, and served as an alternate director on its first board. During his tenure in business, he served on a large number of corporate boards.

In the early 1990’s, Milinda served as Special Representative for the Sri Lankan Government under the Administration of President Ranasinghe Premadasa, and as Special Advisor to Mr. Premadasa’s own Ministry of Policy Planning and Implementation. At the same time, he was also Special Advisor to Mr. Ranil Wickremesinghe in his capacity as Minister of Industries, Science and Technology. He also functioned as Chairman of the Ceylon Institute for Scientific and Industrial Research (CISIR, now known as the ITI) and as a founder board and management committee member of the Janasaviya Trust Fund.

As Special Representative, he represented Sri Lanka in a wide range of negotiations with donor countries, the World Bank, the IMF, the US Government, and the EU, negotiating several bilateral agreements related to economic co-operation, investment, intellectual property protection, double taxation, IT, scientific co-operation, and textiles. At that time, Milinda also represented the Sri Lankan Government at several international human-rights related forums.

He first entered Parliament as a National List Member of Parliament in 2000. In the General Election of December 2001, he contested from the Colombo District as the Organizer for Colombo East and was elected to Parliament. His campaign platform called for the building of trust in the political system and political leaders, changing the political culture and the restoration of ethics and values in politics and society.

During his second term as member of Parliament, Milinda served as Cabinet Minister for Economic Reform, Science and Technology of the UNF Government as well as Deputy Minister of Policy Development and Implementation to then Prime Minister Ranil Wickremesinghe who himself held the ministerial portfolio.

During this term in office, Milinda played a key role in establishing a ceasefire and beginning peace talks between the Government and the LTTE and subsequently served as one of the principal Government negotiators. He also spearheaded the government’s economic reform programme and functioned as the principal interlocutor with the international donor community. In addition, Milinda was responsible for giving leadership to developing and implementing Sri Lanka’s ambitious ICT policy, E-Sri Lanka.

Shortly after the dissolution of Parliament in February 2004, Milinda resigned from his ministerial post in the caretaker government. He was re-elected to Parliament again in the General Election of April 2004 as an UNP MP for the Colombo District. In early 2005 the UNP appointed him as Chief Organizer for Colombo West in addition to his responsibilities as Chief Organizer for Colombo East.

Milinda has created and hosted a number of TV talk shows starting with In Black and White, (2000-2003). This show featuring interviews with several world leaders, thinkers, authors, artists, journalists and business leaders was also carried on Channel News Asia which is telecasted in India, Southeast Asia and the Middle East. For his next two talk show series, Obey Wedikawa (Your Forum) and Gamin Gamata (Village to Village) Milinda traveled each week to various parts of the island to talk with diverse groups of Sri Lankans. Transcripts of his popular television programme Urumayaka Ulpath (Sources of Our Heritage), another popular series in which he visited respected spiritual leaders to engage in a dialogue about the role of religion in modern society.

He also brought the award-winning The Commanding Heights a television documentary to Sri Lanka. The series based on the Pulitzer-prize winning book of the same name explored the evolution of the international economy in the 20th Century. His television show Yuktiya Udesa, examined issues related to the administration of justice in Sri Lanka.

Milinda currently writes a regular column in both the Sunday Lankadeepa, which is the largest Sinhala language newspaper and in the Sunday Thinakkural, the leading Tamil-language newspaper. In addition, he has also contributed articles internationally to publications such as The Washington Post and The Asian Wall Street Journal.

His personal trilingual website, established in 2002:  www.milinda.org, is one of the earliest and few trilingual personal websites in Sri Lanka. The Webby Awards, which have been dubbed “the Oscars of the Internet” by the New York Times, recognized www.milinda.org as an honoree in the categories of Political and Personal Websites in 2007. Milinda’s weekly Sunday radio show on Sirasa FM, Sanvada, discusses relevant contemporary issues.

Milinda served as a member of the High Level Commission on the Legal Empowerment of the Poor, which was co-chaired by Madeleine Albright and Hernando de Soto. An initiative which operated under the United Nations Millennium Challenge Goals, the commission was comprised of several prominent international figures including former presidents, prime ministers and cabinet ministers of several countries.

In 1999, the World Economic Forum (WEF) based in Geneva nominated Milinda to serve as a Global Leader for Tomorrow. They again selected him to serve as a member of the newly created group of Young Global Leaders in 2005. He is the only Sri Lankan to have been named to both of these prestigious groups.

In 1999, the Government of Brazil conferred the ‘Order of Rio Branco” on Milinda in recognition of the services he rendered to Brazil as Honorary Consul for Brazil (1990-2004).

In 2005, Milinda was invited to become the Chairman of the Dayaka Sabawa of the Amarapura Nikaya, one of the three main Buddhist sects in Sri Lanka. Since taking over the chairmanship, the Sabawa has begun to publish a quarterly news magazine, Amarapura, on religious affairs. Milinda is also a trustee of the Soma Sadaham Sevana Trust which was formed by the Amarapura Dharmarakshitha Nikaya in July 2005.

He has also founded several non-profit organizations. The underlying goal is to empower local communities and to strengthen civil society. These organizations engage in a large range of projects in the areas of education, social reform, social welfare, publishing, humanitarian de-mining, culture and religion.