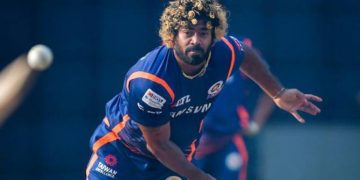 March 27 (India Today) – Mumbai Indians fretting over Jasprit Bumrah’s fitness have received a boost with news coming in from Sri Lanka that Lasith Malinga will be available for the upcoming IPL games.

“SLC decided to give permission to Lasith Malinga to play in the ongoing IPL. The management decided to release Malinga from participating in the Super Provincial; since he would get an opportunity to play with much stronger opposition in IPL; which consist of international players,” read a statement from Sri Lanka Cricket.

Earlier Malinga’s IPL availability was under a cloud with the Sri Lankan cricket board insisting on all players participating in a domestic Super Provincial one day tournament (scheduled between April 4-11) to stay in contention for the World Cup.

But back channel talks between Sri Lanka cricket, BCCI and Mumbai Indians coached by Mahela Jaywardene has done the trick.

SLC Chief selector Ashantha de Mel was earlier quoted saying that Malinga’s place in the World Cup bound squad is guaranteed, so he is free to participate in the IPL.

“We have no issues if he goes to IPL – the board had given him a no-objection certificate already, so he’s free to go. Anyway he has been one of our best bowlers in one dayers, so there’s no question about his place in the team,” Mel said.

“Anyway he has been one of our best bowlers in one dayers, so there’s no question about his place in the team,” Mel added.

With Bumrah’s workload under a scanner, particularly following his on field injury during the Mumbai Indians opening game, he could be seen sitting out in some IPL games. The original freak genius Malinga who has played mentor to Bumrah over the years for the franchise is expected to take a key bowling role again in the Rohit Sharma led side.