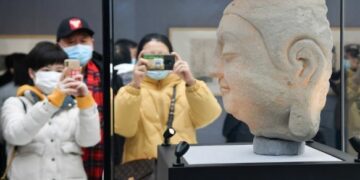 Chinese shopping and tourism amidst the pandemic

Chinese shopping and tourism amidst the pandemic Discovering the Buddha in the local museum. Photo:Xinhua

Colombo, February 18 (Xinhua): For Chinese people, both at home and abroad, two activities are mandatory during the Spring Festival, namely, travelling and shopping. But the COVID-19 pandemic has put curbs on both in some places.

Undeterred, the inventive Chinese have devised ways to travel and shop. In China, short-distance tourism and on-line tourism have emerged to meet the need under pandemic conditions. While shops are open in China, in some countries abroad like Sri Lanka, where there are few shops selling Chinese products, expatriate Chinese depend on on-line shopping via trans-national enterprises.

After the outbreak of the COVID-19 epidemic, flight frequencies to China have been reduced, which has blocked the once common way of buying things Chinese. But not to worry: online shopping from China has become one of the most convenient ways for the Chinese in Sri Lanka to purchase Chinese products.

A Xinhua report from Shanghai says that the pandemic has reduced inter-city movement of people during the Spring Festival.  But new leisure modes have become drivers of domestic tourism, with local tours and online tourism widely favored during the week-long Spring Festival holiday.

The holiday, also known as the Lunar New Year, lasts from Feb. 11 to 17 this year. Unlike in the past, when billions of passenger trips were made for the most important Chinese festival, many people have avoided long-distance travel this year to prevent the spread of COVID-19.

In late January, the Ministry of Transport cut its forecast of passenger flow to around 1.15 billion passenger trips for the 40-day Spring Festival travel season this year. It marks a drop of more than 20 percent year on year, and a plunge of over 60 percent from 2019.

Zhang Jiuling and her parents working in Shanghai did not leave for their hometown in northeastern China during the holiday.

Instead, they joined a city walking tour along the Huangpu River, where people can enjoy the juxtapositional beauty of modern urban facilities and century-old buildings, revealing the historical path of the city’s industrialization. They also visited museums and art galleries in Shanghai.

“Staying put in Shanghai has brought me a chance to get to know more about the city where I was raised,” said Zhang, 16. “I’ve found another kind of happiness in the Lunar New Year.”

Zhou Weihong, deputy general manager of the Shanghai-based travel agency Spring Tour, said compared with the Spring Festival in 2019, the company’s local tourism products increased by 1.5 times, with the number of city walking tours surging by five times this year.

“Some 80 percent of our guests were stay-puts,” she said.

The average occupancy rate of hotels in Shanghai’s suburban areas, including Jinshan, Songjiang and Chongming, stood at 57 percent from Feb. 11 to 13. It is up by 27 percentage points from the same period in 2019, according to the city’s administration of culture and tourism.

A report issued by the online platform Meituan showed that over 50 percent of its users prefer travel destinations within 50 km. In addition to traditional winter attractions like hot springs and skiing venues, urban zoos, botanical gardens and parks have become widely-browsed choices.

Online travel agency Tongcheng-eLong said its hotel bookings from locals for the first three days of the festival were 32.5 percent higher than for the same holiday in 2019.

In Taiyuan, the capital of north China’s Shanxi Province, several tourist attractions are too popular to make a reservation.

He Rui, an official with the city’s bureau of culture and tourism, said cultural centers and libraries are open to the public free of charge. On the premise of strictly implementing epidemic prevention and control measures, 10 scenic spots are free for people staying put for the holiday.

The Longquan Temple in Taishan Mountain, one of the major historical and cultural sites in the city, received nearly 4,000 visitors on Feb. 13, many more than the pre-epidemic years.

“I didn’t expect so many people in the off-season, as we still charge each visitor 30 yuan (4.6 U.S. dollars) for entrance,” said Zhang Zhimin, curator of the temple’s administrative body Taishan Mountain Museum. He added that most of the visitors are locals and migrant workers staying in Taiyuan.

After seeing the lost Buddha head shown at the gala on television on the eve of the Spring Festival, Taiyuan resident Chen Fei drove to the Tianlongshan Grottoes to visit the retrieved treasure, only to find the attraction was closed for forest protection and fire prevention.

“Disappointed as I was, I have discovered the beauty and mystery of the grottoes online,” said Chen, 29.

Through the WeChat official account of the Tianlongshan Grottoes Museum, Chen visited a digital restoration exhibition. It includes the pictures and messages of the retrieved head via virtual reality (VR) technology.

The Tianlongshan Grottoes in Taiyuan are notable for the Buddha statues located within. Construction of the caves began in the Eastern Wei Dynasty (534-550) and continued until the Tang Dynasty (618-907). The stone Buddha head, stolen from one of the statues almost a century ago, was brought back from Japan in mid-December.

For the people who stay at home, online tours have become a new choice. It enables them to enjoy the beauty of tourist attractions while avoiding cross-infections.

In Shanghai, museums, art galleries and other public cultural venues held over 300 online exhibitions. Internet giants, including the Trip.com Group, Baidu, and Meituan, also hosted online activities to showcase the city’s cultural appeal during the holiday.

A tourist scans a QR code to get information for tourists in Yunnan at a scenic area in Kunming, southwest China’s Yunnan Province, Feb. 13, 2021. (Xinhua/Jiang Wenyao)

In the resort-rich province of Yunnan in southwest China, the online travel platform of “Go-Yunnan” has launched live feeds of famous scenic spots such as the Lugu Lake and the Meri Snow Mountain.

Dai Bin, president of the China Tourism Academy, said that China is creating a space for cultural and tourism development where both non-local tourists and residents are integrated into a unified tourism market. “With the integration of cultural and tourism development and the introduction of science and technology, the sense of gain and satisfaction of Chinese people will further improve” said Dai.

(The featured picture at the top is by Xinhua/Li He)