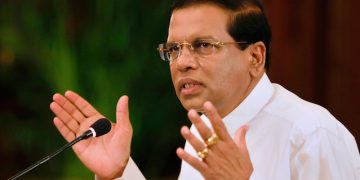 Colombo, February 13 (newsin.asia): A crucial meeting between Sri Lankan President Maithripala Sirisena and his alliance partner, the United National Party (UNP)-led United National Front (UNF), which is taking place here on Tuesday, appears to be deadlocked over the issue, who should be Prime Minister in the planned reshuffle.

Following the crushing defeat of the coalition partners Sri Lanka Freedom Party (SLFP) and the UNP/UNF in the February 10 local bodies elections at the hands of the Sri Lanka Podujana Peramuna (SLPP), the ruling coalition is rocked by a blame game.

President Sirisena and his SLFP are blaming  UNP leader and Prime Minister Ranil Wickremesinghe for the defeat because of his indirect involvement  in the LKR 11.5 billion Central Bank Bond scam and want him to be replaced by the non-controversial UNP leader and parliament Speaker Karu Jayasurirya.

But the UNP would have none of that. It wants the President to allow it to form a government on its own with Wickremesinghe as Prime Minister. It is ready to break the coalition for this purpose.

And the UNP can form a government on its own because it, along with its allies in the United National Front (UNF), already has 106 MPs needing only seven more to get a simple majority.

This, it can get, with defectors from the SLFP. The SLFP members could sit in the opposition benches and support the government at voting time to give it a majority.

However, baring President Sirisena, the SLFP cadres and a good number of its MPs ,  want an alliance with the electorally successful SLPP, which is but a breakaway group of the SLFP, and form a non-UNP  government.

But unfortunately for them, President  Sirisena will have no truck with the SLPP because its founder and Supremo, Mahinda Rajapaksa, has been his principal rival and bête noir.

Sirisena had ditched Rajapaksa and the SLFP to become the Presidential candidate of the UNP-led Joint Opposition in the January 2015 elections.

As President, Sirisena had said that he will never appoint Rajapaksa as Prime Minster even if the Rajapaksa-led group emerges as the single largest party.

Therefore, the most likely outcome of Tuesday’s meeting is termination of the SLFP-UNP alliance and the UNP’s going  it alone and making a bid to form a government of its own.

But if that is stalled by the President, parliament could opt to pass, with the required two thirds majority,  a resolution seeking snap polls to clear the confusion and come back with a fresh mandate.

(The featured picture at the top shows President Maithripala Sirisena)