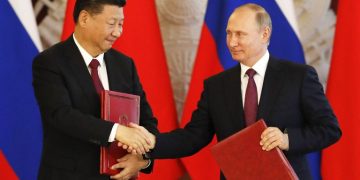 Beijing, July 6: (Xinhua):  One week after Xi Jinping was elected Chinese President in 2013, he travelled to Russia for his first overseas visit as Head of State.

Over the past six years, Xi and his Russian counterpart, Vladimir Putin, have met each other nearly 30 times. Such frequent meetings between two Heads of State are rare in international diplomacy.

In June 2019, Xi embarked on his eighth Presidential trip to Russia, which bears unique significance given the fact that the two countries are marking the 70th anniversary of their diplomatic ties, and the world is facing growing levels of uncertainty.

Putin, for his part, has traveled to China for nine times since Xi began his Presidency. His last trip was to attend the second Belt and Road Forum for International Cooperation in Beijing in April.

In some of the most memorable moments, the two leaders honored each other with the highest medals of their countries.

Their intensive interactions have nurtured a close personal rapport between the two Presidents, and attested to the closeness and robustness of the comprehensive strategic partnership of coordination between their countries – “a pair of good neighbors, good partners and good friends.”

“After seven decades of development, the China-Russia comprehensive strategic partnership of coordination is now at its best in history,” Xi said in an interview with the Russian media.

In Xi’s own words, 70 years on China-Russia ties have become a major-country relationship featuring the highest degree of mutual trust, the highest level of coordination and the highest strategic value.

China and Russia have different advantages in natural resources and technologies, and their economies are highly complementary, which can translate into a substantial increase in trade and investment in coming years.

Bilateral trade surged 27.1 percent in 2018 to hit a record of 107.1 billion U.S. dollars, the highest growth rate among China’s top 10 trading partners. Analysts expect the strong momentum to continue and the trade volume to double in the near future.

Strategic projects in traditional fields of energy, aerospace and interconnectivity have made solid progress. Cooperation in such sectors as agriculture, finance, science and technology, and e-commerce has developed rapidly.

The first ship carrying liquefied natural gas from Russia’s Yamal Peninsula in the Arctic traversed the sea to China last summer, and millions of tonnes more are expected to be supplied every year thanks to the project partly financed by China.

A second line of the China-Russia oil pipeline began commercial operation in 2018, and the east-route natural gas pipeline is expected to supply gas to China by the end of this year.

The Tongjiang railway bridge and the Heihe highway bridge will be completed this year to make cross-border transportation much easier.

In 2018, Chinese tourists made 1.8 million trips to Russia while Russian travelers made nearly 2 million trips to China. The two countries have become major sources of tourists and travel destinations for each other. Beijing and Moscow have also co-conducted Tourism Year activities.

When the world is undergoing profound changes unseen in a century, a steady China-Russia relationship bears high strategic value for each other, and provides an anchor for global stability.

In the face of growing protectionism, unilateralism and economic chauvinism, the global economic recovery is in serious jeopardy, the multilateral trading system is under attack, and the existing international order is challenged.

Beijing and Moscow agree and have joined hands to uphold an international system with the United Nations at the heart. They have also pledged to safeguard norms and principles widely acknowledged in the international community, and vowed to build a multipolar world and democratize international relations.

Also, China and Russia hold to a non-alignment policy that targets no third party. Such an approach is different from the Western-style military alliance, which has an innate need for an enemy — real or imaginary — and tends to put the entire world on edge.

In today’s world, the China-Russia relationship can offer some inspiration for other major countries in the world in this new era of growing interdependence.

A closer and stronger partnership between China and Russia, both permanent members of the UN Security Council, is also set to make the world more peaceful, stable and prosperous.

China and Russia share similar views on many regional and global issues. As they seek to better coordinate their foreign policies, they will continue to be a ballast stone and stabilizer in the world, which is now rife with uncertainties.

As the two have repeatedly affirmed, Beijing and Moscow will firmly uphold multilateralism and seek to build a more open world economy against the backdrop of rising unilateralism and trade protectionism.

They have also pledged to closely coordinate within such multilateral frameworks as the United Nations, the Shanghai Cooperation Organization and the Group of 20 to make the international system more fair, just and inclusive.