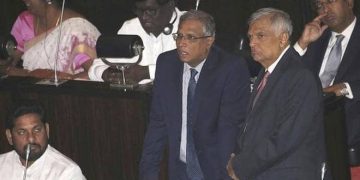 The TNA, with its 16 MPs (later down to 14), played a critical role in ensuring the survival of the Ranil Wickremesinghe-led United National Front (UNF) government.

But for the staunch support of the TNA, and the critical role played by Jaffna district MP, M.A.Sumanthiran, the newly appointed Prime Minister Mahinda Rajapaksa would have succeeded in engineering the defection of enough UNF MPs to consolidate his ill-gotten position.

According to President Sirisena himself, MPs were offered up to Rs.500 million to defect. About 45 UNF MPs were seriously considering crossing over to Rajapaksa’s side. But when they learnt that the TNA and the Muslim parties had committed themselves to being with Wickremesinghe, they developed cold feet and banished all thought of defecting. They stayed put in the UNF, thus preventing Rajapaksa from getting the required majority support in parliament to remain in office.

However, the TNA did not support Wickremesinghe blindly. It bargained hard to get a political deal which will help shore up its political fortunes in the North and East. The TNA’s stock had declined noticeably since the 2013 provincial and 2015 parliamentary elections.

The TNA could not deliver on its election promises to the Tamils about finding a political solution to the Tamil question and ensuring war-time accountability issues.

The TNA-led Northern Provincial Council had failed to ensure any economic development despite the allocation of hundreds of millions of rupees by the government in Colombo.

In its negotiations with Wickremesinghe and his lieutenants during the constitutional crisis, the TNA demanded that the draft new constitution giving wide powers to the provinces which had been cleared by the Steering Committee, should be tabled in parliament as a priority, so that the constitution is passed before the next parliamentary elections in August 2020.

The TNA also demanded that its MPs should be involved in the Central government’s economic development schemes in the Tamil areas in the North and East. This was considered to be of utmost importance because people had been complaining of the “top down” approach adopted by Colombo in designing and executing development projects in the North and East. Participation in decision making and execution of projects will enable the TNA to show its electoral constituency that the party is actively engaged in working for its welfare.

The TNA wanted Wickremesinghe to give these assurances in writing in the form of an MoU. But Wickremesinghe sensed a political danger in doing that.  However, he assured that TNA MPs will be coopted in the developmental process and that he will table a draft constitution in parliament before Sri Lanka’s independence day on February 4, 2019.

Well, on becoming Prime Minister again, Wickremesinghe did place the Experts’ Committee’s report on the constitution. But he denied that it was the “draft constitution.” He appended the views of various personalities and parties on issues of relevance so that parliament could come to a balanced view and adopt a constitution on the basis of consensus.

The TNA, on its part, let it be known that the Wickremesinghe government will consult it on all matters relating to the North and East.

But both the placing of the “draft” constitution on the table of the House and the understanding about consulting the TNA on North-East issues have run into a storm.

The main opposition party, the Sri Lanka Podujana Party (SLPP) led by the  Leader of the Opposition Mahinda Rajapaksa, has opposed both tooth and nail.

Rajapaksa has dubbed the draft constitution as a scheme to divide Sri Lanka into “nine semi-independent provinces”. His party leaders have said that the main demand of the Tamil people is not a new a constitution with greater devolution of power, but economic development and social welfare.

The SLPP also believes that a new constitution is not needed and that amending the present one from time to time will suffice. The party also feels that if a new constitution is indeed necessary, it should be made an issue in the coming parliamentary elections so that the people of Sri Lanka have a say.

On the issue of involving the TNA in designing and executing development schemes in the Tamil areas, the SLPP’s view is that the main purpose of the scheme is to help the TNA refurbish its jaded image among the Tamils of the North and East.

It is not clear if the placing of the draft of the new constitution in parliament will convince the Tamil voter that the TNA has done a lot in the political sphere. The people are yet to see how consultation with the TNA on the design and execution of development schemes improves matters because no such consultation has taken place so far.

Meanwhile, emotive issues such as accountability of the Sri Lankan armed for alleged war crimes and the release of Tamil prisoners languishing in jail for long, have not been attended to yet. Sources say that these issues were not taken up with the UNP’s leadership during the constitutional crisis.

(The featured picture at the top shows TNA leader R.Sampanthan with the UNF leader Ranil Wickremesinghe in parliament)