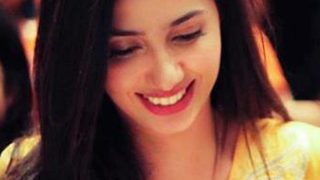 See the difference between Mahira Khan and the Maharashtra Navnirman Sena

See the difference between Mahira Khan and the Maharashtra Navnirman Sena Karachi/Mumbai, October 12 (NIA): Pakistani actress Mahira Khan’s dignified and civilized response to the cowardly antics of the Maharashtra Navnirman Sena (MNS) shows that even in the midst of madness, sanity can exist.

“In the 5 years that I have been working as an actor I believe that I have tried my best to keep my country’s respect intact – by being a professional and by representing Pakistan here and elsewhere to the best of my abilities.

As a Pakistani and citizen of the world I strongly condemn any act of terror, any loss of human life no matter which soil it is on. I will not rejoice in bloodshed and war. I will always hope for and dream of a world where my child can live without it, and always plead with everyone to imagine a peaceful world.

It has also been in this time my faith in saner minds and goodness has been restored, thank you for the messages, love and support. Hoping and praying for peace always.”

And this what the Maharashtra Navnirman Sena (MNS) Chitrpat Sena Chief, Amey Khopkar, had said in fresh threats issued on Monday to filmmakers Karan Johar and Mahesh Bhatt:

“MNS  appealed  to the Mumbai film industry not to work with Pakistani artistes in the wake of the Uri attack and noted that Bhatt and Johar had not given a positive response to our appeal. If they work with any Pakistani artiste, they should be prepared for a befitting response from us. We have not received any written assurance from either Shah Rukh Khan or Karan Johar (assuring that Pakistani actors won’t be taken in their movies). Our agitation over banning Pakistani actors will go on. We will oppose their films. If these two films are released, we will stall the release. Our workers are ready to go to jail. We will stall the films in our style.If Karan Johar and Mahesh Bhatt even dare to make a film with Pakistani actors in the future, we will beat them up on the streets. We will also thrash Pakistani artistes.”

While Karan Johar has come under fire for casting Fawad Khan in his upcoming production, Ae Dil Hai Mushkil, Mahesh Bhatt recently tweeted a picture in favor of peace that drew a lot of criticism.

Karan Johar has maintained silence on the threats, and Bhatt took to Twitter to announce his intention to do the same.